Yankees, Anthony Rizzo agree to 3-year deal worth up to $51M 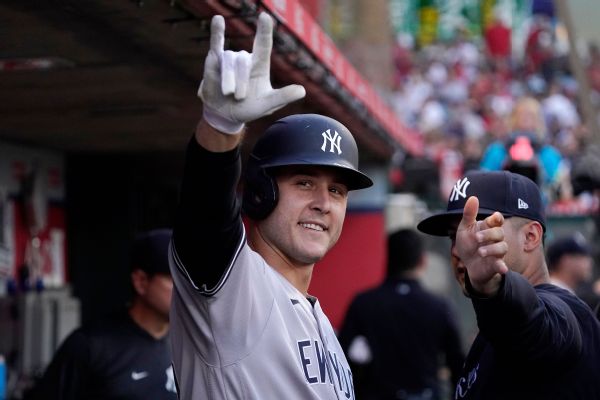 Anthony Rizzo is re-signing with the New York Yankees on a multi-year deal worth up to $51 million, a source told ESPN on Tuesday.

Rizzo will make $34 million over the next two seasons plus a club option for 2025 that includes a $6 million buyout, a source told ESPN’s Jeff Passan, brining the total to $40 million guaranteed. His 2025 option is for $17 million.

Acquired from the Chicago Cubs at the 2021 trade deadline, Rizzo returned to New York for the 2022 season on a two year, $32 million deal which included an opt out after the first year. He became a free agent after opting out of the second year.

Rizzo hit 32 home runs for the fourth time in his career — he has never hit more — and had 75 RBIs in 130 games despite a .224 batting average. The 33-year-old was sidelined between Aug. 31 and Sept. 18 by back pain and headaches from an epidural injection to treat his back.

Rizzo quickly became a favored teammate for many current Yankees including Aaron Judge who is also a free agent. At the recently completed GM Meetings, Yankees general manager Brian Cashman indicated keeping Rizzo was a priority — in addition to re-signing Judge.

Yankees, Anthony Rizzo agree to 3-year deal worth up to $51M