Why England’s Harry Kane didn’t get a VAR penalty vs. France

We’re analysing every VAR decision made throughout all 64 games at the 2022 World Cup. England vs. France was littered with VAR incidents, but were the decision correct?

After each game, we take a look at the major incidents to examine and explain the process both in terms of VAR protocol and the Laws of the Game.

Possible foul: on Saka in the buildup to Tchouameni goal

What happened: Dayot Upamecano won the ball off Bukayo Saka just outside his own area, and set up a break that resulted in Aurelien Tchouameni giving France a 17th-minute lead, but there was a VAR check for the tackle. 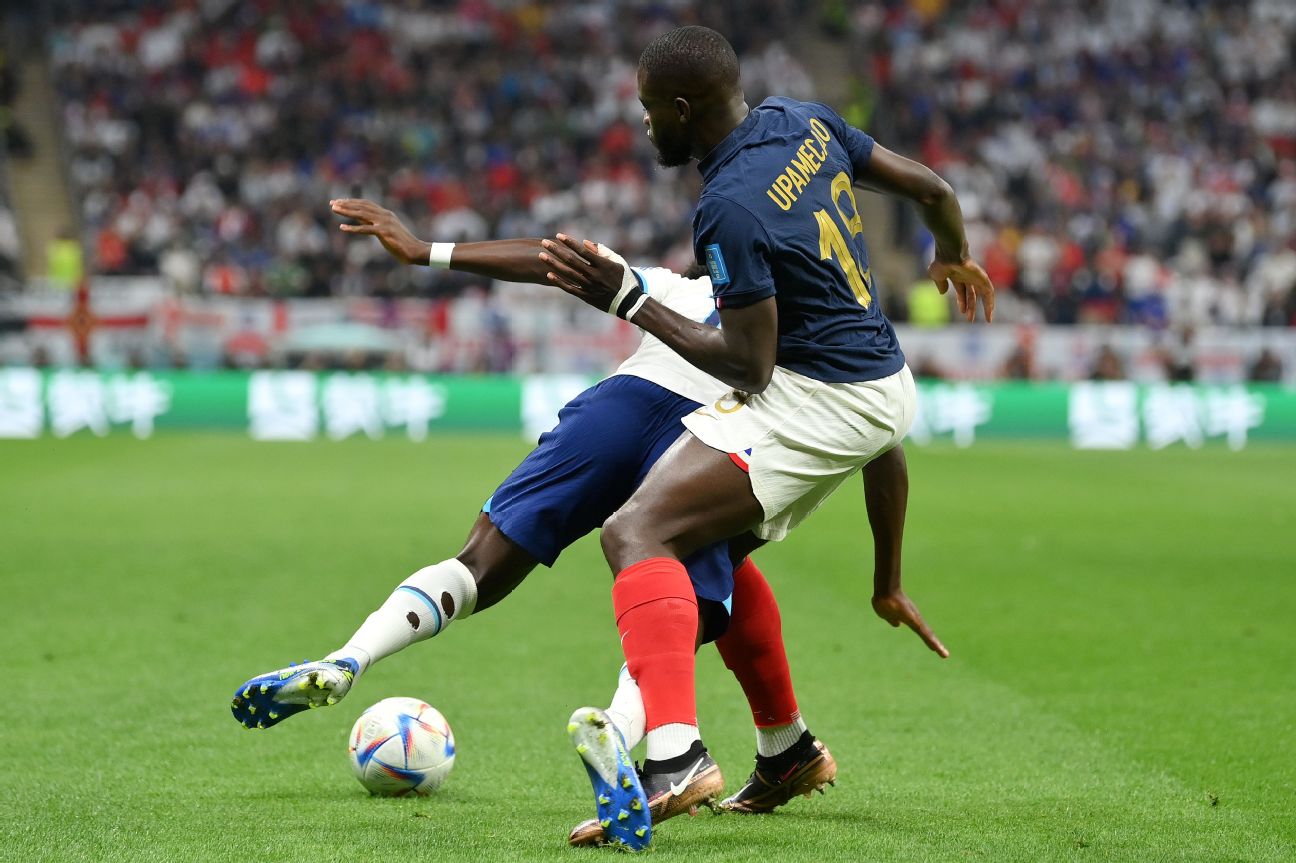 VAR review: The VAR, Nicolas Gallo of Colombia, has two things to consider: is the challenge within the attacking phase, and was it a clear and obvious error by the referee, Wilton Sampaio of Brazil, not to award a free kick.

The challenge came 27 seconds before Tchouameni’s shot hit the back of the net, and while time is not the ultimate factor in determining the start of the attacking phase it can influence the decision. It’s more about the team that lost possession being in a position to win the ball back, and also if the attacking team stopped its forward momentum. It’s arguable neither of these were present, but to go so far back in a game to disallow a goal would be something we haven’t see at this World Cup.

The second question is over the challenge itself. We can see from the replays that Upamecano caught Saka’s left foot, causing him to fall over and lose possession. But was it a clear and obvious error for the referee not to see that? It’s a tough one to call, and while it should be a free kick there probably isn’t enough to cross the threshold for a VAR intervention.

What happened: In the 25th minute, Harry Kane went down on the edge of the area after robbing Upamecano of the ball. Referee Sampaio waved play on, but there was a lengthy VAR review for a penalty. 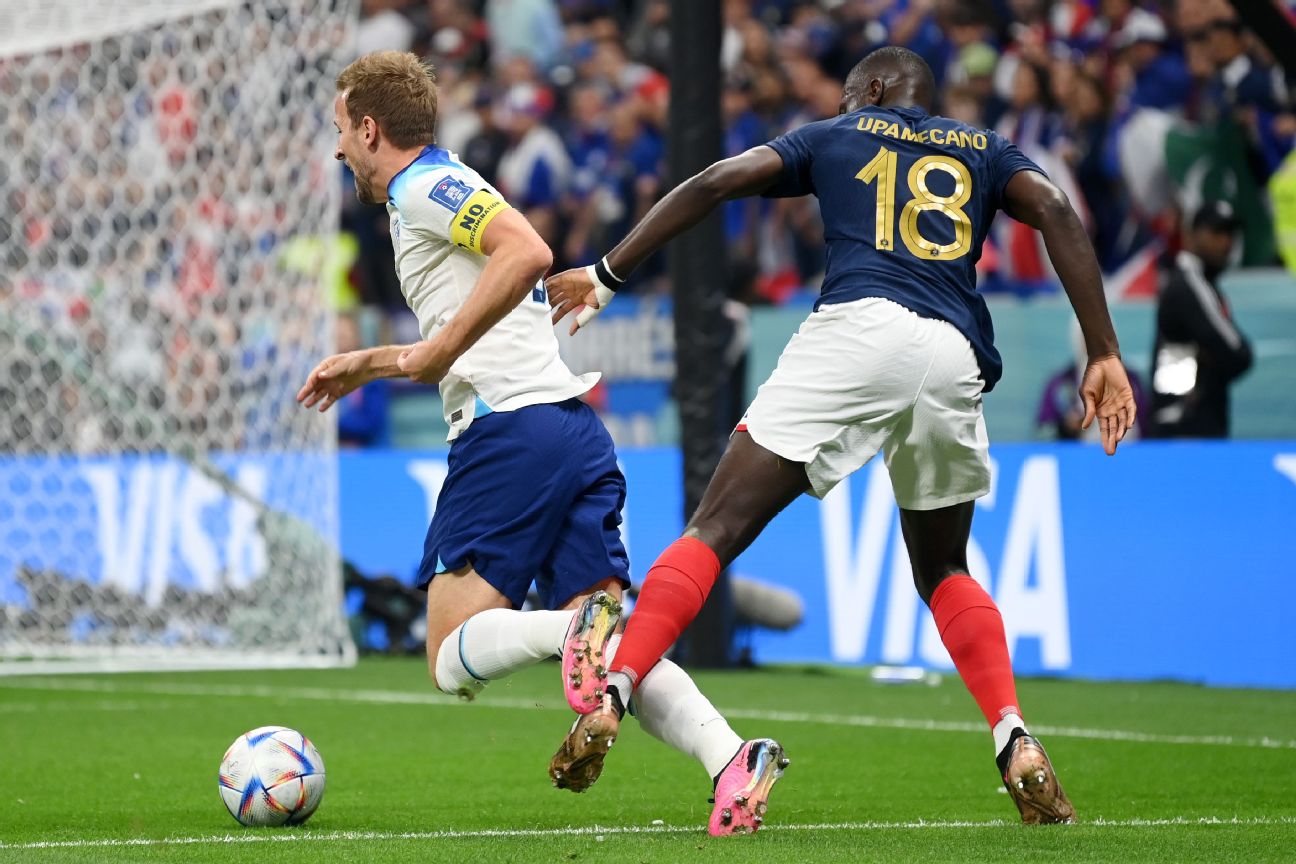 This all comes down the VAR needing the weight of evidence to prove where the foul contact took place — just like with the ball in play on Japan’s winning goal against Spain. The VAR will take the moment of contact which causes the foul: where is that part of Kane’s leg in relation to the line (the line belongs to the box, so it’s a penalty if on it.) That Kane falls into the area, or has a foot inside it when contact is made isn’t relevant.

The VAR will check every available angle (there are far more than we are shown on the television) to try to work out where this contact was, using multiple synced cameras to the same frame. The angles shown on TV really weren’t conclusive, and only the camera square to the penalty area line can really give the VAR the best evidence. In this case, it was decided that contact was just outside the area, or at least there wasn’t the evidence it was on the line.

But this again highlights the unacceptable level of information on VAR decisions from FIFA within games. It only shows fans what the VAR is viewing if the referee is at the monitor. Otherwise, it all goes on in the background and everyone is left to guess about the process. We all want to hear the audio from the VAR room, but at the moment FIFA (and UEFA for that matter) and reluctant to even show supporters what the team is looking at.

VAR overturn: Penalty for foul by Hernandez on Mount

What happened: In the 80th minute, Jude Bellingham attempted a long ball over the top to Mason Mount, who was knocked to the ground by Theo Hernandez. Referee Sampaio again waved play on as the ball ran through to goalkeeper Hugo Lloris, but the VAR advised there should be a penalty.

VAR decision: Penalty, with Kane shooting over the bar.

VAR review: This was undoubtedly the correct decision, with the referee appearing to have his view of the incident blocked by France defender Raphael Varane. Hernandez had no intention of playing the ball and clearly used his upper body with force to knock Mount over, rather than it being shoulder to shoulder.

Hernandez was booked, and several England players were shocked he was not shown a red card for denying an obvious goal-scoring opportunity. Mount wasn’t in control of the ball, and there is certainly enough doubt he would have got on the end of it and had a strong chance to score, so for that reason a yellow was a fair outcome.

Why England’s Harry Kane didn’t get a VAR penalty vs. France