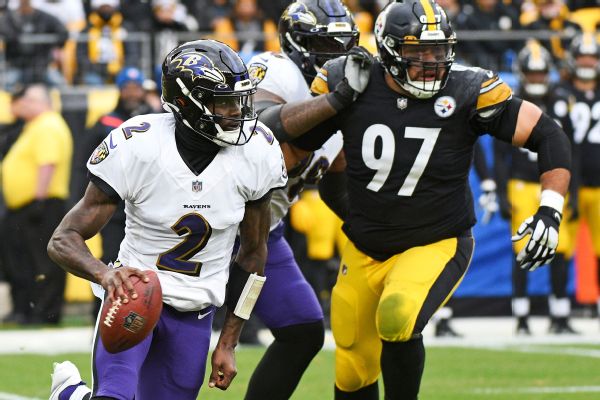 Huntley, who was filling in for the injured Lamar Jackson, was put in the concussion protocol midway through the third quarter of the Ravens’ 16-14 victory over the Pittsburgh Steelers on Sunday. The Ravens turned to undrafted rookie Anthony Brown to finish out the game at quarterback as the Ravens (9-4) remained atop the AFC North and ended a four-game losing streak to the rival Steelers.

Harbaugh was upbeat about Huntley’s availability after talking to him in the locker room.

“Listen, I can’t speak on it, but he seems good to me,” Harbaugh said. “He’s reciting the months of the year backwards. Can you do that right now?”

When talking about the Ravens’ quarterback options for Saturday, Harbaugh did not mention Jackson, who injured his knee a week ago. League sources told ESPN’s Adam Schefter that Jackson is not expected to be ready for Baltimore’s game in Cleveland.

Huntley was injured with 7:26 left in the third quarter, when he took a crushing hit from Steelers safety Minkah Fitzpatrick on a third-down run. Fitzpatrick’s right elbow landed on Huntley’s face mask, causing the quarterback’s head to snap backward. Huntley lay on the ground for a few seconds before being helped up by teammates.

After being evaluated in the medical tent, Huntley jogged to the locker room with the Ravens holding a 13-7 lead and was eventually ruled out of the game. In his first start of the season, Huntley was 8-of-12 passing for 88 yards and ran for 31 yards.

Harbaugh, though, did stop short of guaranteeing that Huntley would come back and start at the Browns (5-8).

“We’ll see how it goes,” Harbaugh said. “You trust the docs on that and they’ll do a good job with him. Whatever it is, it is.”

This was a critical win for the Ravens, who had lost their past four games when Jackson didn’t start. With Huntley out and Jackson inactive, Brown completed 3 of 5 passes for 16 yards a day after being elevated from the practice squad.

Brown was asked how he would feel if he made his first NFL start on Saturday.

“It would be great, but like Coach [Harbaugh] said, [Huntley] sounds ready and I have all the confidence in the world in him,” Brown said. “If it’s my turn, it’s my turn, and I just have to work at it.”

Winning for the sixth time in seven games, the Ravens relied on an opportunistic defense and dominant ground game. Baltimore intercepted Mitch Trubisky three times inside its 15-yard line and produced 215 yards on the ground, including 120 from J.K. Dobbins, who was activated off injured reserve after being out six straight games.

In the fourth quarter, the Ravens ran the ball on 12 of their 15 plays (excluding kneel-downs) and handed the ball off to running backs on the final nine plays. Harbaugh acknowledged Baltimore didn’t call any quarterback runs, which was a way to avoid Brown getting hurt.

Asked who would quarterback the Ravens if Brown got injured, Harbaugh said, “We’ll keep that top secret information right now. But we do have a name. I did ask that question recently.”

Even though the Ravens would prefer this trend to end, the players are proud of how Baltimore has been able to win the past two games despite losing its starting quarterback each time.

“I think it just shows our resilience as a team and how good we are at handling adversity,” Ravens offensive tackle Ronnie Stanley said. “I think this team is very battle-tested in that sense. Not just this year, but year after year, there’s a lot of adversity that has come through this organization. I think we’re more than ready to handle any situation.”