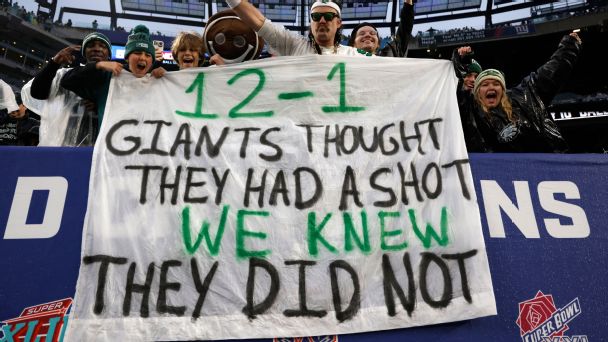 Week 14 of the NFL season had seven divisional matchups Sunday.

All of the familiar opponents made for some mildly personal postgame barbs.

Philly made the short trip up the NJ Turnpike to Metlife Stadium and handled business. The Eagles’ 48-point total against the Giants trails only their Oct. 4, 1959 matchup for highest single-game total against New York all-time.

The Vikings could have clinched the division and punched their ticket to the postseason Sunday, but the Lions made sure that didn’t happen on their watch.

Can we get an ✖️ in the chat? https://t.co/gmNXI3nqHT pic.twitter.com/PTpvW7c5xU

Although it doesn’t appear in the box score, the weather was a formidable foe for both squads. Rain and flurries played a role in the game, opening with 10 consecutive punts.

The Bills beat out the weather and the Jets to remain the AFC’s top seed.