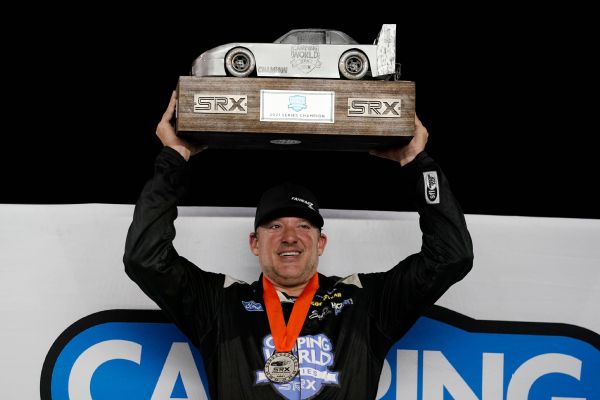 Tony Stewart‘s Superstar Racing Experience is moving to ESPN and a new night as the network plans to use the all-star summer racing series to revitalize its “Thursday Night Thunder.”

ESPN said Monday it signed a multiyear agreement with Superstar Racing Experience that begins in July. SRX will air on six summer nights as “Thursday Night Thunder,” which was ESPN’s branding for motorsports programming that started in the 1980s.

The old programming showcased grassroots racing from across the country.

SRX launched in 2021 in partnership with CBS, which gave the stock car races a prime-time Saturday night slot. SRX pits stars from NASCAR, IndyCar and other series against each other in identically prepared cars.

“SRX has been an impressive property in its first two seasons and has produced competitive and exciting action,” said Burke Magnus, president of ESPN programming and original content. “We look forward to bringing live racing back to summertime Thursday nights on ESPN with SRX.”

ESPN has aired nearly every form of motorsports starting on Oct. 7, 1979, exactly one month after the network launched. Its first race aired was a USAC event taped the previous summer.

ESPN aired its first NASCAR Cup race in 1981 — a tape-delayed event from Rockingham Speedway in North Carolina. The first live race was a CART event at the Milwaukee Mile later that summer.

ESPN currently televises the full Formula One schedule. The first F1 race aired in the United States was on ABC in 1962, and F1 first aired on ESPN from 1984 through 1997.

“When we had the opportunity to pitch the concept of ‘Thursday Night Thunder’ on ESPN, it was my firm belief this would be another disruptive and monumental moment in SRX and racing history: reuniting race fans with ESPN on short tracks with superstar drivers all across the U.S. for years to come,” said Don Hawk, who was named CEO of SRX ahead of its second season.