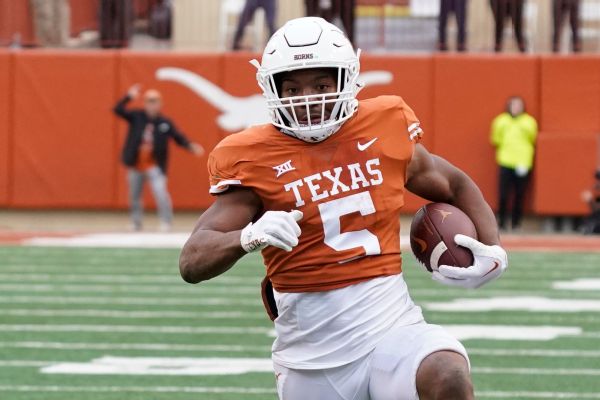 AUSTIN, Texas — Bijan Robinson, who joined elite company as one of the most prolific running backs in Texas history, announced Monday that he is forgoing his final season with the Longhorns, will be entering the NFL draft and will not play in the Valero Alamo Bowl.

“I’ve done everything that I tried to do in God’s plan for me while I’ve been here,” Robinson said. “It’s time to start the new journey. I’m just excited to figure out another part of my life, just like I tried to figure it out here.”

Robinson, a Tucson, Arizona native, leaves Austin fourth on the all-time rushing list at Texas, with his 3,410 career yards ranking behind only Ricky Williams (6,279), Cedric Benson (5,540) and Earl Campbell (4,443). He became the first Texas player with back-to-back 1,000-yard rushing seasons since Vince Young in 2004-2005, and won the Doak Walker award this year as the best running back in college football.

He spoke about how Campbell embraced him, inviting him to his house when he first arrived, telling him how he was going to be the next great back in Austin, and how Williams was like a big brother to him.

“It’s been just a blessing to be a part of a long line like that,” Robinson said. “I want to be a guy that all the kids look up to at a different level. That’s the legacy that I want to leave for sure.”

With a rare blend of strength and speed, the 6-foot, 222-pound Robinson had six touchdown runs of more than 30 yards this season, broke 91 tackles, and ranked second in the country with 1,002 yards after contact. He is Mel Kiper Jr.’s No. 8 overall prospect and is considered the top running back in the draft and was projected as the No. 5 pick to the Philadelphia Eagles in Todd McShay’s most recent mock draft.

After playing in just nine games in the shortened 2020 season and being limited to 10 games last year after his season was cut short by an elbow injury, Robinson was a key figure in Texas’ rebound from a 5-7 debut by Steve Sarkisian last year. Robinson led the nation in combined rushing and receiving yards with 1,894 (1,580 rushing, 314 receiving), was second with 20 total touchdowns and led the Big 12 with 131.7 rushing yards and 157.83 all-purpose yards per game as the Longhorns finished 8-4.

“Being a running back, it’s smart to keep the wheels on when you do want to go to the NFL,” Robinson said. “I thought this was the perfect time to go and do that.”

Robinson finished his high school career as Arizona’s all-time leader in rushing yards (7,036) and touchdowns (114) and was the first player in state history with three straight 2,000-yard seasons.

Robinson said he will stay in Austin and begin training on Jan. 2 for the draft.