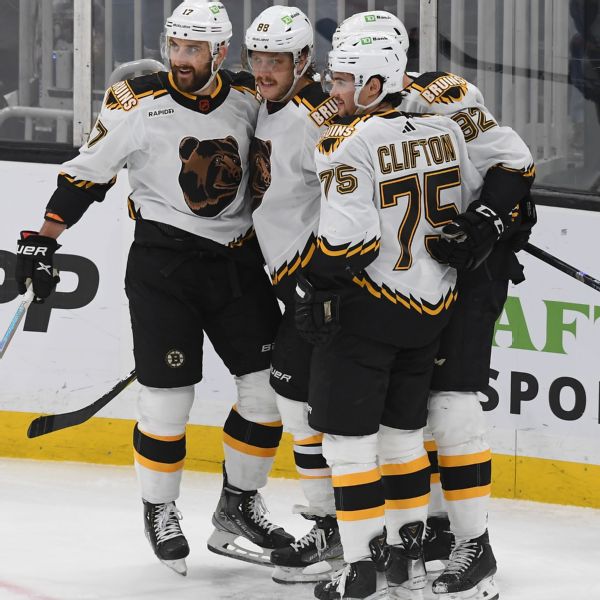 BOSTON — David Pastrnak scored twice, part of a dominant effort that ended with four consecutive goals to conclude the scoring as the Boston Bruins defeated the Chicago Blackhawks 6-1 on Saturday night.

The win allowed the Bruins to tie an NHL record with 11th straight home victories to start the season, matching a mark reached by the Florida Panthers last season, and the Blackhawks in 1963-64.

According to ESPN Stats & Information research, Boston is also the first NHL team to win 16 of its first 18 games since the 1929-30 Bruins.

The Boston Bruins win once again at TD Garden.

They tie an NHL record with their 11th straight home win to start the season (Florida Panthers in 2021-22 and Chicago Blackhawks in 1963-64).

Jake DeBrusk, David Krejci, Taylor Hall and Patrice Bergeron also scored in the win, and Jeremy Swayman stopped 17 of 18 shots. The goal was the 999th point in Bergeron’s career.

Charlie McAvoy assisted on four of the Bruins’ goals as Boston became the first team in the league to top 30 points (32).

Boston hits the road for two games this week — against Tampa Bay and Florida — before returning home to host Carolina for its annual Black Friday matinee.

Behind a fired-up TD Garden crowd that broke into numerous chants of “Let’s go Bruins,” Boston jumped to a 2-0 edge early in the second period en route to matching its season high for goals in a game.

Playing his first game since leaving with a left knee injury from a collision with Bergeron, Swayman was sharp despite the puck primarily being in the Blackhawks’ zone.

The Bruins are now 8-0 against Western Conference teams.