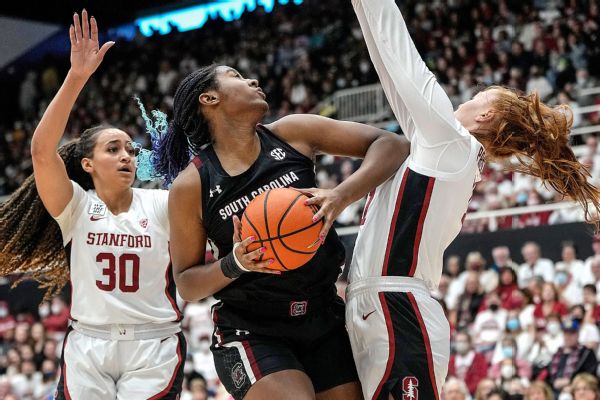 South Carolina remained No. 1 in The Associated Press women’s basketball poll Monday after a chaotic week that saw half of the top 10 teams lose at least one game.

The Gamecocks again were the unanimous choice, receiving all 29 votes from a national media panel after edging No. 2 Stanford in an overtime thriller Sunday. South Carolina has now won 16 consecutive games against ranked teams dating to a 2021 loss in the Final Four to Stanford, which remained second in this week’s poll.

Huskies coach Geno Auriemma sees losses by the top teams as a good thing for the sport.

“It’s great sign for women’s basketball, I think that now you can’t just walk into the gym and you know, roll it out there and go, ‘Yeah, well, we’re a top 10 team in the country, and we can just roll over (you). Just because you’re unranked,'” he said. “I think those days are over.”

Auriemma sees the trend continuing as the season progresses.

“I think if this keeps up, that’s the kind of thing that’s made March Madness,” he said. “The madness that is on the men’s side, right. And we need some of that madness on the women’s side. More of it.”

Indiana jumped six spots to No. 6 while Notre Dame, North Carolina, Iowa and Louisville round out the top 10.

The Lady Vols lost two games last week, including falling to UCLA in the semifinals of the Battle 4 Atlantis. The Bruins vaulted into the poll at No. 19.

Like many teams across the country, Texas and Tennessee welcomed in a few new players from the transfer portal and it takes for them to adapt.

“You’ve got a lot of teams now that because of the transfer portal, they’re getting really good players. But they’re trying to learn how that new school plays, what the standards are,” said Louisville coach Jeff Walz, who has two transfers of his own. “And it makes it different, in my opinion.”

Kansas State entered the poll at No. 25 after beating then-No. 4 Iowa last week. Oklahoma and Nebraska fell out of the poll.

The Big East improved to 6-0 against Top 25 opponents this season. UConn and No. 16 Creighton each have two while No. 23 Villanova and Marquette each have one. The Golden Eagles are just outside the Top 25 this week.

North Carolina moved up five spots to eighth, its best ranking since 2015 when the Tar Heels were also eighth. They are playing in Oregon on Thursday in the Phil Knight Invitational and then either Iowa State or Michigan State on Sunday.

Many of the top women’s teams are playing in tournaments around the country as well as Mexico and the Bahamas this week.