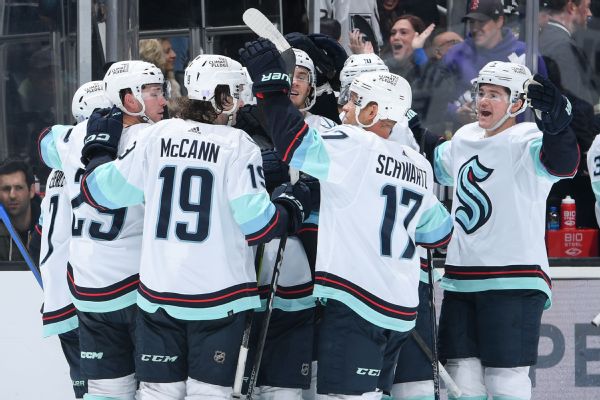 LOS ANGELES — Andre Burakovsky had two goals, including the winner in overtime, and the Seattle Kraken defeated the Los Angeles Kings 9-8 on Tuesday night in the highest-scoring NHL game this season.

Burakovsky scored on the power play at 2:08 of the extra session to give Seattle the first six-game winning streak in franchise history.

Matty Beniers and Jared McCann each had two goals in the highest-scoring game of the Kraken’s two-year existence. Alex Wennberg, Daniel Sprong and Oliver Bjorkstrand also scored, and Martin Jones made 27 saves.

With each team having been involved in a 13-goal game this season, they kept up their high-scoring ways to top that total by the end of the second period.

Quick was pulled after McCann got his second goal for a 5-4 advantage at 4:56, his fifth conceded on 14 shots, before Kempe equalized less than two minutes later.

But the decision to change goaltenders proved costly, as Petersen was at fault for the score that put the Kraken back in front.

Petersen made a blocker save on Sprong’s shot but didn’t realize the puck went high into the air before coming down in his crease, landing on his skate and tumbling into the net at 7:27.

Bjorkstrand then beat Petersen with a wrist shot from the high slot under the crossbar to make it 7-5 midway through the middle period.

Vilardi picked up his second goal with 4:19 left, but Burakovsky struck back with 22 seconds to go, restoring a two-goal lead at 8-6.

The first period was practically a game unto itself, producing a 3-3 tie after 20 minutes with Kopitar scoring 16 seconds in, two power-play goals per team on their four combined opportunities, and Kraken defenseman Justin Schultz picking up the secondary assist on all three of his club’s goals to set a franchise record for most assists in a period.

ESPN Stats & Information and The Associated Press contributed to this report.