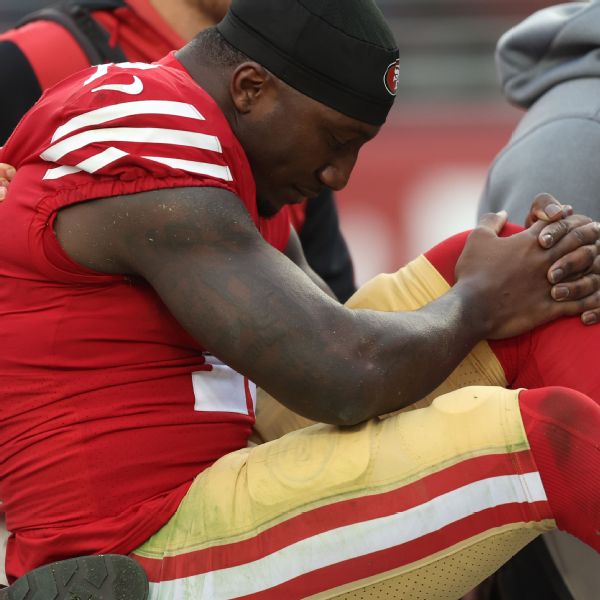 “We’ve got a quarterback,” Bosa said.

Purdy is, in fact, the Niners’ third starting quarterback this season, but in the first half of Sunday’s 35-7 win against the Tampa Bay Buccaneers, he looked every bit the part of a grizzled veteran. Behind Purdy’s efficient performance, San Francisco improved to 9-4 with its sixth win in a row and can clinch the NFC West crown as soon as Thursday night if it can beat the Seattle Seahawks on “Thursday Night Football.”

Purdy put together one of the best first halves in a starting debut in NFL history, but the win didn’t come without a cost, as receiver Deebo Samuel suffered a left ankle injury in the second quarter and did not return.

After the game, Niners coach Kyle Shanahan said the team does not know the extent of Samuel’s injury but said it is “most likely” a high ankle sprain. Shanahan and the Niners were encouraged that Samuel did not have any breaks in the ankle.

High ankle sprains generally take about a month to heal, so if that’s what Samuel has, he theoretically could return in time for the first week of the NFL playoffs. Wideout Brandon Aiyuk said he saw Samuel at halftime and had a chance to offer some words of encouragement.

Asked how Samuel was feeling, Aiyuk said it was hard to tell.

Even without Samuel, who was tracking toward a big day with four catches for 43 yards and four carries for 21 yards and a touchdown at the time of his injury, Purdy and the offense remained unfazed.

Purdy, who was the 262nd and final pick of the 2022 NFL draft, became the first “Mr. Irrelevant” to both start and win an NFL game at quarterback. He also became the first quarterback to beat Tom Brady in his first start. Brady had been 7-0 against first-time starters before Sunday.

Purdy’s first-half efficiency was so good — 14-of-18 for 185 yards with two touchdowns for a rating of 146.5 — that he threw only three times in the second half as San Francisco salted the game away.

Purdy’s first start got off to a rough beginning when he checked into the wrong play and took a sack from Bucs safety Keanu Neal on the opening play. But Neal hit Purdy helmet-to-helmet, drawing a penalty and allowing Purdy to settle in.

From there, Purdy rarely missed as he finished 16-of-21 for 185 yards with two touchdowns for a passer rating of 134, adding a 2-yard rushing touchdown. Purdy joined Don Strock as the only quarterbacks since 1950 to throw for at least two touchdowns and run for at least one score in the first half of their first start.

“My emotions and everything, just my hotel room studying, all that kind of stuff, it was all relatively the same,” Purdy said. “And then when we found out we’re getting the ball to start the game out, that’s when I was like, ‘OK, this is getting real, let’s go.’ So that’s why I’m saying to sort of get hit on the first play of the game, I liked it, but other than that, it was another football game.”

Shanahan said Purdy didn’t come out of the game unscathed. He is dealing with an oblique injury, though Shanahan and Purdy said he was taken out for Josh Johnson because of the lopsided score and could have finished the game if needed.

Shanahan indicated that Purdy’s status for Thursday in Seattle is no sure thing depending on how he feels on Monday, though Purdy was optimistic.

“We’ll see how it goes this week,” Purdy said. “It just felt a little tight at the end just from taking some hits, but honestly if I needed to play throughout the rest of the game, I would have. So, I’ll get some treatment on it and be ready to roll.”

Samuel’s injury was of more concern. It happened with about five minutes left in the second quarter on second-and-9 at Tampa’s 43. He took a handoff from Purdy and ran up the middle as a pair of Bucs defenders converged.

Samuel attempted to spin out and appeared to get his left foot and ankle twisted in an awkward direction. Samuel lost the ball as Tampa recovered but stayed down for a few minutes in obvious pain.

Most of the Niners’ roster quickly ran on the field to be close to Samuel as the medical staff checked on him and San Francisco fans chanted, “Dee-bo, Dee-bo.” Samuel briefly stood up and appeared set to hobble to the sideline with some help from medical staff but dropped back to the ground and yelled an expletive picked up by the officials’ microphone.

A cart came out soon after, taking a dejected Samuel to the locker room. Samuel had his hands on his left knee and his head down as the cart disappeared into the Niners’ tunnel.

“He’s tough as hell and he tried to walk off,” Bosa said. “Just hoping for the best.”