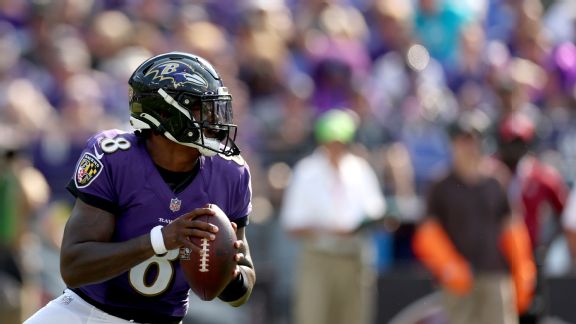 OWINGS MILLS, Md. — Lamar Jackson said he didn’t throw a pass in Wednesday’s practice, and was listed on the team’s injury report with a right elbow injury, but the Baltimore Ravens quarterback plans on playing Sunday at the New England Patriots.

“I’m going to throw Sunday – a lot Sunday,” Jackson said with a smile.

Jackson wore a protective sleeve on his right arm for the first time in his five seasons in Baltimore. The sleeve extended from the middle of his right bicep to his wrist and featured extra padding around the elbow area.

“I’m good. The pad came with the sleeve,” Jackson said. “It wasn’t added or anything like that. I will be out there Sunday. I’ll be out there [Thursday] in practice. I’m good.”

This is the first time Jackson has been listed on an injury report with an arm-related injury. During the media viewing portion of practice (first 30 minutes), Jackson watched Tyler Huntley throw passes. Jackson’s participation was limited to handing the ball off to running backs.

Ravens QB Lamar Jackson is wearing a protective sleeve on his right arm in Wednesday’s practice and did not throw a pass to receivers during media viewing pic.twitter.com/xwHD4VIX6M

Jackson has been sidelined only once in the regular season due to injury. He missed the last four games of last season with an ankle injury.

Ravens coach John Harbaugh indicated there is no concern about Jackson’s availability heading into New England, where the Ravens are 0-6 in the regular season.

“It’s a normal course-of-the-season-type thing,” Harbaugh said. “He practiced [Wednesday]. So, he’ll be playing on Sunday.”

The Ravens have been relying more on Jackson’s arm than ever before. His 531 yards passing, which rank 12th in the league, have accounted for 71% of Baltimore’s offense because of the struggles in the running game. Jackson has dropped back on 65 of the Ravens’ 107 offensive plays (61%).

Baltimore has done a better job at protecting Jackson this year. He’s been hit 16 times, which is 16th in the league.

Another improvement has been Jackson’s control of the offense and his audibles.

“You saw in the game how much was done at the line of scrimmage,” Harbaugh said. “So, it’s always a collaboration between the quarterback, … the guys on the field, and the playcalling and all that. I think he operated that game ‘A plus’. All the things that he was asked to do, which was a lot at the line of scrimmage, he did very well with it, and it was impressive.”