Rams’ Van Jefferson back to practice, expected to play vs. 49ers 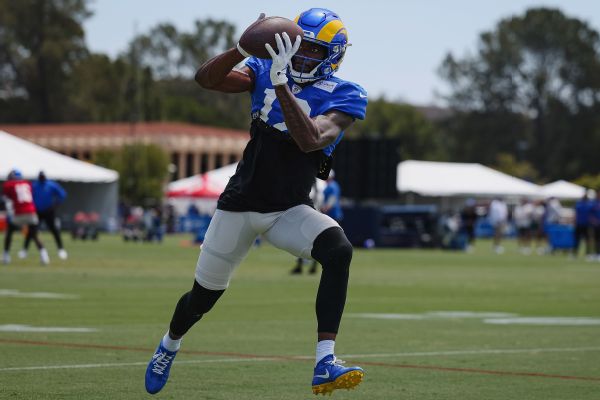 Jefferson had not practiced since he had knee surgery in August. The team put him on injured reserve in late September in part because the Rams needed his roster spot because of injuries at other positions.

Rams coach Sean McVay said the team would take it a day at a time, but he does expect Jefferson and Hill to contribute this week against the San Francisco 49ers. Asked what he missed most during Jefferson’s absence, McVay said his “overall productivity.”

“Obviously, he brings the big-play element, but I think Van’s a complete receiver,” McVay said. “I think he showed that with the way that he was progressing really throughout last year, but then especially where he was at in relation to just his performance in training camp. And camp is camp, but it’s still playing football.

“And so to be able to get him back, a guy with a lot of experience, a lot of ownership of our offense, the ability to play in a bunch of different spots, I think he’s a great complement to some of the guys that we already have in the mix. But you’re getting a big-time playmaker back who can do a lot of different things for us.”

Last season for the Rams, Jefferson had 50 catches for 802 yards and six touchdowns.

McVay said there’s a possibility that Jefferson could have been ready to come back before Week 8 had the Rams not needed his roster spot but that the team wanted to make sure his return wasn’t rushed.

“I think we felt like the smart approach was to do what we did,” McVay said. “And it was great to be able to have Van back out there this week. He looks good, and I’m excited for Van to be able to help our team.”

McVay also said he expects center Brian Allen to return from the knee injury that has kept him out since he left the season opener against the Buffalo Bills.

Rams’ Van Jefferson back to practice, expected to play vs. 49ers