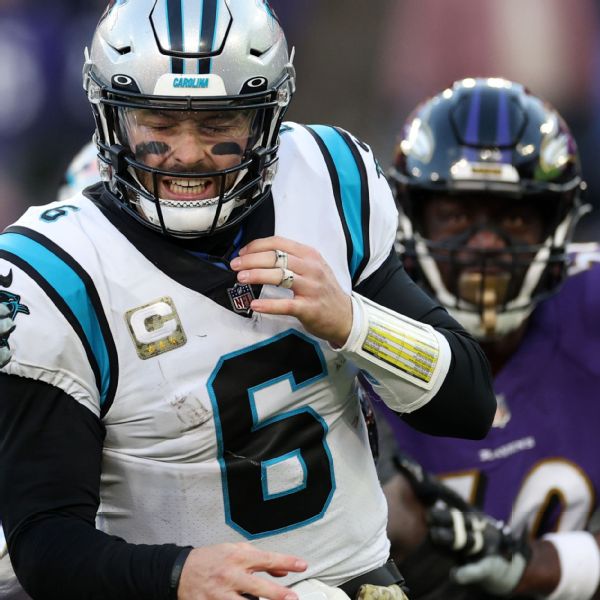 BALTIMORE — Carolina Panthers quarterback Baker Mayfield admitted Sunday “it sucks” to be questioned about whether he should remain the starter after his performance in a 13-3 loss to the Baltimore Ravens at M&T Bank Stadium.

“It’s tough,” the first pick of the 2018 draft said matter-of-factly after his first start since Week 5. “I’ll be honest with you. I put my heart and soul in this, and this sucks. I just hope everybody else feels the same way, to be honest with you. That’s how you turn things around. You have to care about it. You do.”

Mayfield’s record as Carolina’s starter is now 1-5. With the Panthers 3-8 and nearing elimination from playoff contention, there’s a chance interim coach Steve Wilks will turn to Sam Darnold, the third pick of the 2018 draft, for next week’s game against the Denver Broncos.

Wilks has said for several weeks he wants to get a look at Darnold, who began the season on injured reserve because of a high ankle sprain after losing the open competition in training camp for the starting job to Mayfield. Wilks did not commit to who would start next week.

Wilks also could return to P.J. Walker, who was 2-3 as the starter before suffering a high ankle sprain last week to open the door for Mayfield to start again.

“It’s too early to say,” Wilks said. “We’ve got to evaluate the tape, and then from there, I’ll make a decision.”

The tape will show Mayfield led Carolina to only three points and threw interceptions on Carolina’s last two possessions with the Ravens (7-3) leading 13-3. It will show the first one was the result of a batted ball that has been an issue for Mayfield all season and the second appeared to be a result of wide receiver Shi Smith running a lazy route.

Mayfield finished 21-of-33 passing for 196 yards with no touchdowns for a Total Quarterback Rating of 20.2, slightly better than the league-low 15.3 he had over the first five games.

“Not good enough,” Mayfield said when asked to evaluate his performance. “We didn’t win the game. I say take care of the ball, but we have to make more plays. Batted balls, when they’re not getting the rush. … Shi and I have to be on the same page.

Mayfield played mistake-free through three quarters, and Carolina trailed only 6-3 with 8:14 remaining. That’s when the Ravens stripped Smith of the ball after a catch and two plays later scored on a 1-yard touchdown run by quarterback Lamar Jackson.

Jackson, the last pick in the first round of the 2018 draft, is now 6-3 against Mayfield.

But even then the offense was mostly stagnant. Carolina had only 63 yards in the first half and finished with only 205. The running game that averaged 159.5 yards over the past four games, including a season-high 232 yards in the past game against the Atlanta Falcons, was limited to 36 yards.

“It’s tough when you can’t get the run game going,” Mayfield said. “We just have to make more plays. It’s just one of those days. It was a long day for us on offense. We’ve got to make the plays when they’re there, because a team like that there’s not going to be many.”

Mayfield said the game plan coming in was “great, but the execution, that’s another story.”

As for why the Panthers have been unable to win after being in so many close games, Mayfield recalled what it was like when he joined the Cleveland Browns in 2018 after they’d gone 1-31 their two previous seasons.

“It’s truly a mindset when you’re trying to get over the hump and turn things around,” he said. “You can look at your record right now, and obviously our record right now is not great, but look at how we’re losing. You have to look at those things. It’s a cliche thing [Bill] Parcells said, ‘You’ve got to learn how to stop beating yourself before you learn how to win.’

“And I think right now, today, was a pretty good example of that.”