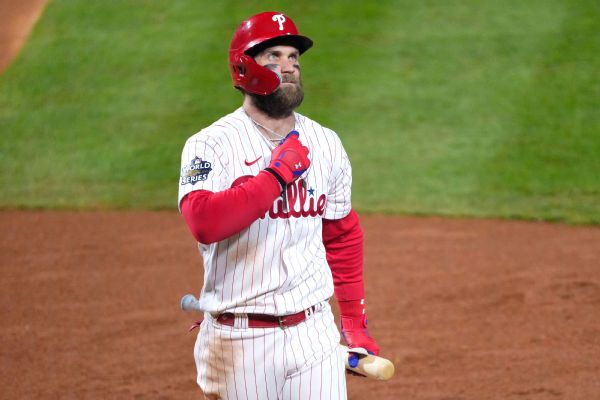 Philadelphia Phillies star Bryce Harper will undergo surgery on the ulnar collateral ligament in his right elbow next week, team president Dave Dombrowski told reporters, though it was not immediately clear how long the recovery timeline will be.

Harper is set for surgery Nov. 23 for a tear to the UCL that he initially suffered in April and prevented him from playing the field the rest of the season. The 30-year-old received a platelet-rich plasma injection in his right elbow in May and shifted to the designated hitter role.

It was not yet known whether Harper will undergo Tommy John surgery, Dombrowski said.

Harper was the Phillies’ designated hitter throughout the majority of the season, including in the playoffs where he shined. He hit .400 in the National League Division Series against the Atlanta Braves and .500 in the NL Championship Series against the San Diego Padres before slowing down in the World Series. He hit .200 as the Phillies lost in six games to the Houston Astros.

Information from ESPN’s Jesse Rogers and The Associated Press was used in this report.