Panthers’ Baker Mayfield focused on winning, not his future 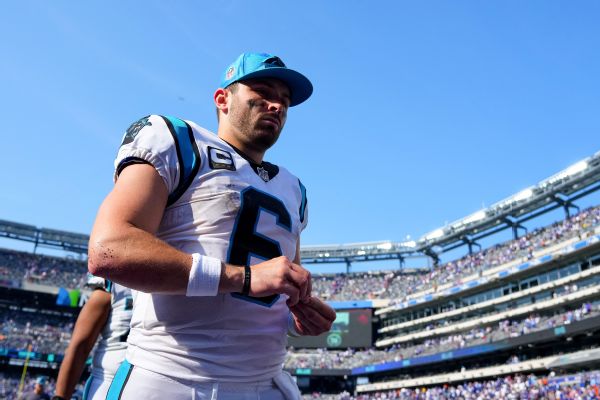 CHARLOTTE, N.C. — Baker Mayfield admits there have been times the past month when he has wondered whether he would get another chance to start for the Carolina Panthers and what that would mean for his future as a quarterback in the NFL.

The first pick of the 2018 draft also insists his future isn’t what the opportunity to start Sunday against the Baltimore Ravens (6-3) is about.

“It’s pretty important to win, considering we’re still in a division race,” Mayfield said Wednesday. “That’s where I’m at. I’m not worried about everything else. It’ll take care of itself as long as I do my job. We’ll see where it goes.”

Interim coach Steve Wilks named Mayfield the starter on Monday after an MRI determined PJ Walker had suffered a high ankle sprain in Thursday night’s 25-15 victory over the Atlanta Falcons that left Carolina (3-7) only two games back of Tampa Bay (5-5) in the NFC South.

It will be Mayfield’s first start since a Week 5 loss to the San Francisco 49ers in which he was replaced by Walker because of a high ankle sprain. He has remained Walker’s backup the past four games despite being healthy enough to play.

Mayfield, in the last year of his rookie contract, said Sunday isn’t about getting the starting job back full time.

“I’m just trying to win,” he said. “I’m not worried about it being my job, quote unquote. I know what I’m capable of. This team does as well. I’m going to go out there fully confident and ready to win.”

Wilks said Mayfield looked good in Wednesday’s practice, but “nothing over the top.” He said consistency is what he’s looking for from Mayfield on Sunday, and said he believes Carolina’s commitment to the run the past five games should help the quarterback accomplish that.

“It’s really taking the pressure off anybody that’s playing quarterback,” Wilks said of the run game. “They don’t have to really sit back there and try to win the game for us. We’re going to try to establish what we do up front and give him a clean pocket when he tries to push the ball downfield.”

Mayfield had a Total Quarterback Rating of 15.3, the lowest in the NFL and the lowest over a five-game span since ESPN began using the statistic in 2006, during a 1-4 start.

He was sacked 15 times — Walker has been sacked five times the past five games — and was on his way to career lows in almost every statistical category before being replaced.

“We’ve just found our identity as time has gone on,” Mayfield said of the offense.

Mayfield’s only playing time the past five weeks came in the second half of a Nov. 6 loss to the Cincinnati Bengals in which Carolina trailed 35-0 in the first half with Walker throwing two interceptions and recording a 0.0 passer rating.

Mayfield completed 14 of 20 pass attempts for 155 yards and two touchdowns with no interceptions against the Bengals for a season-high 83.4 Total QBR.

That still wasn’t enough for Mayfield to regain the starting job for Thursday night’s game against Atlanta, and Mayfield was all right with that even though, as a competitor, he was hoping for another chance then.

“The team lost,” Mayfield said of the Cincinnati game. “That’s what I said after the game and that held true after watching the film. It’s easy to point fingers, but we came back the next week and battled and got the win.”

Mayfield didn’t play a snap Thursday night, but he did get attention when his helmetless head-butts with many of the offensive line celebrating the victory was caught on video.

“I’ve always done that,” Mayfield said with a smile. “It just happened to get caught on camera. I’ve done that since college. I love this game. I love my teammates. We work too hard not to enjoy it. A good head-butt every once in a while goes a long way.”

A good showing opposite 2019 NFL MVP Lamar Jackson, selected with the last pick in the first round of the 2018 draft by Baltimore, also could go a long way for Mayfield. He knows that if he struggles, Sam Darnold, the No. 3 pick in 2018, will be waiting in the wings.

Wilks said he’d like to get Darnold, who began the season on injured reserve with a high ankle sprain, some playing time before he gives him another chance to start after losing the job to Mayfield in training camp.

“I wouldn’t call it pressure,” Mayfield said of his situation. “I always feel really accountable to put us in position to win. That’s my job. You touch the ball every single play, you have a big impact on that. Being able to put us in that position is a big responsibility, and I enjoy that.

“I put a lot of that on myself, but it’s not pressure.”

Panthers’ Baker Mayfield focused on winning, not his future