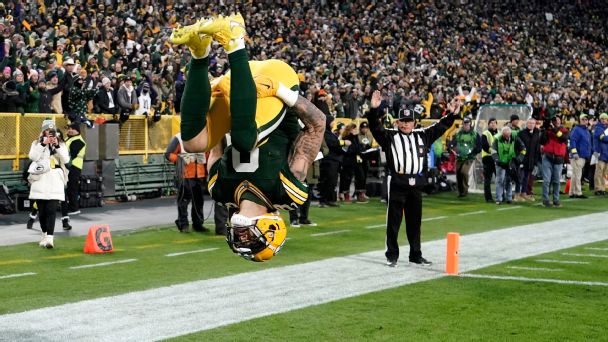 GREEN BAY, Wis. — Aaron Jones did something he’s used to doing against the Cowboys: He found the end zone.

His 12-yard touchdown run in the second quarter was his sixth career touchdown in three games against the Cowboys, and he celebrated it by flying into the end zone like Marshawn Lynch.

Both of the Packers’ touchdowns Sunday were set up by safety Rudy Ford interceptions.

After Christian Watson dropped what would have been a 75-yard touchdown catch on the very first play of the Green Bay Packers‘ very first game of season at Minnesota — and with several more drops after that — the rookie receiver caught a 58-yard over-the-shoulder ball against cornerback Anthony Brown down the right sideline for a touchdown in Sunday’s game against the Dallas Cowboys at Lambeau Field.

Watson had two drops on the Packers’ opening drive of the game.

It was the longest completion for the Packers this season, and before that, Aaron Rodgers had been 0-for-8 on passes with 40 or more air yards, according to ESPN Stats & Information.

It was the first receiver touchdown for the Packers’ second-round pick and tied the score at 7-7 in the second quarter. Earlier in the season, he rushed for a score.