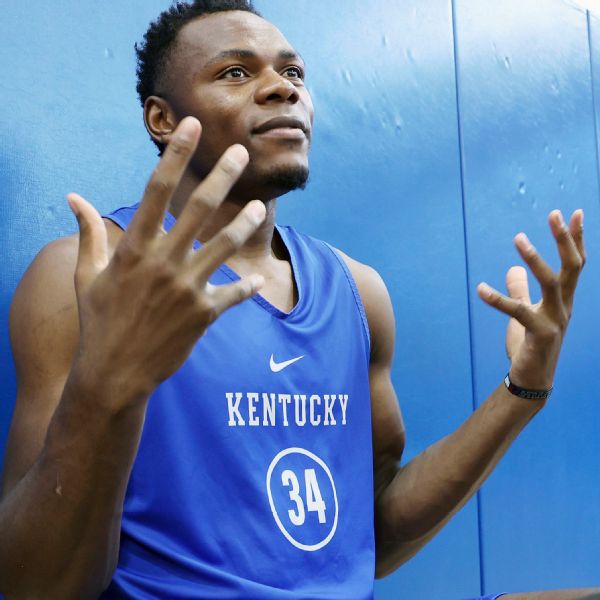 LEXINGTON, Ky. — Kentucky forward and consensus national player of the year Oscar Tshiebwe said Tuesday he “absolutely” anticipates being ready for the No. 4 Wildcats’ season opener after having a procedure on his right knee earlier this month.

The 6-foot-9 senior spoke publicly for the first time since Wildcats coach John Calipari announced on social media that the player would have a “minor” procedure on the knee to “clean some things up.”

Tshiebwe entered the practice court for media day without crutches but wore a flexible brace on the knee over colorful compression tights.

As usual, Tshiebwe was upbeat and optimistic.

“To be honest, I don’t think I will miss games other than exhibition games because it’s not really necessary that I get this done,” he said.

The Associated Press preseason All-America selection averaged 17.4 points and a nation-leading 15.1 rebounds last season on the way to being named the AP’s Player of the Year and sweeping the other five national awards as college basketball’s best player. The native of the Democratic Republic of the Congo said he returned for another season to help Kentucky win the national championship and broaden his game toward boosting his stock for next year’s NBA draft.

He looked dominant during a team workout before NBA scouts on Oct. 9 but was held out of the preceding and following practices before being examined. Tshiebwe underwent surgery that week and missed Kentucky’s Big Blue Madness public practice along with last Saturday’s intrasquad scrimmage in Pikeville, Kentucky, to benefit flood victims.

Calipari had no timetable for Tshiebwe’s return but said he’s moving around and just has to stay off his feet. Kentucky hosts Howard on Nov. 7.

“When he trains, it may swell, but it goes away and for the time being that’s what it is,” Calipari added. “But he’s telling me, ‘I’m feeling good, my leg feels good, I don’t have the same pain that was there.’