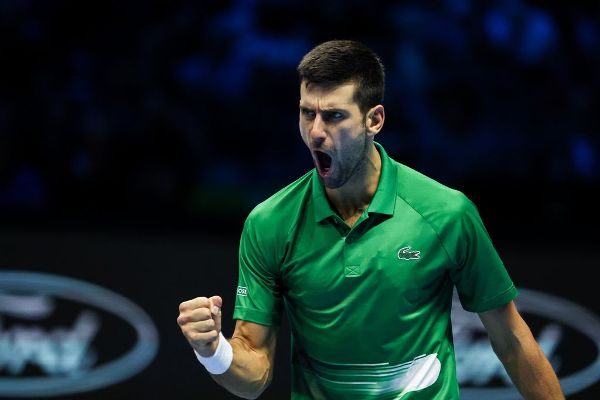 TURIN, Italy — Novak Djokovic beat Stefanos Tsitsipas for the ninth straight time by 6-4, 7-6 (4) in the players’ opening match at the ATP Finals on Monday.

Djokovic has beaten Tsitsipas in his third straight tournament following wins in Astana, Kazakhstan, and at the Paris Masters.

“All the matches we’ve played have been decided by two or three points and that was again the case tonight,” Djokovic said.

He broke Tsitsipas in the opening game and held from there to close out the first set.

“A break in these conditions is decisive,” Djokovic said of the fast indoor court.

A crosscourt backhand passing shot winner that landed on the line helped Djokovic move ahead in the second-set tiebreaker.

Following his win, Rublev wrote, “Peace, Peace, Peace, All we need,” on a TV camera lens in an apparent reference to the war in Ukraine.

Rublev and Medvedev — along with all Russian and Belarus tennis players — have been competing without their flag or country next to their names as part of widespread sports sanctions due to Russia’s war with Ukraine.

Rublev made a similar appeal in February, writing, “No war please” on a TV camera lens shortly after Russia’s invasion.

His latest appeal comes following Russia’s withdrawal from the Ukrainian city of Kherson, one of Ukraine’s biggest successes in the nearly nine-month war.