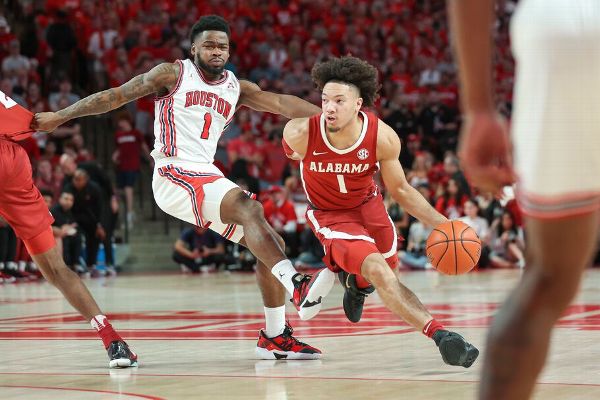 HOUSTON — No. 8 Alabama could have called it a day when it was trailing by double figures early in the second half.

The Crimson Tide didn’t, and earned another marquee win this season.

Alabama rallied from a 15-point second-half deficit to stun No. 1 Houston 71-65 on Saturday, becoming just the fourth team to beat two different AP No. 1s in the same season.

“This is one of those character wins that shows that our guys are going to keep fighting no matter what the score is,” Alabama coach Nate Oats said. “We could have easily given up down 15. The start of the second half wasn’t great. We made some changes with the bench guys. Hung in there, kept clawing away at the lead, finally able to take the lead and then we pulled away from them.”

“Huge program win,” Oats said. “Not sure how many teams get the chance to play two No. 1 teams in nonconference, let alone beat them, but I think that shows where we’ve gotten this program to that we can play with anyone in the country at this point.”

Jamal Shead had 19 points and six rebounds, and Tramon Mark scored 10 points before fouling out with 8:10 remaining for Houston (9-1).

“That’s the No. 8 team in the nation,” Houston coach Kelvin Sampson said. “No shame losing to a really, really good Alabama team. Disappointing obviously. We haven’t lost a lot in this building.”

“We just couldn’t guard,” Shead said. “We didn’t stand in front of the ball for like four or five straight possessions and that’s how they got back into it. And we just weren’t tough enough to finish it out.”

The game was tied at 63 following a Marcus Sasser free throw with two minutes left. Then Clowney put the Tide up by two with a layup with 1:12 remaining, Shead missed a jumper with 48 seconds left and Brandon Miller made two free throws five seconds later to push the lead to four.

Houston went on an 18-2 run to end the first half and start the second half, taking a 44-29 lead with 17:13 remaining on a steal and layup by Jarace Walker, but Alabama responded with a 15-5 spurt to cut the lead to five on a 3-pointer by Sears with 11 minutes left.