Niumatalolo says Navy fired him immediately after loss to Army 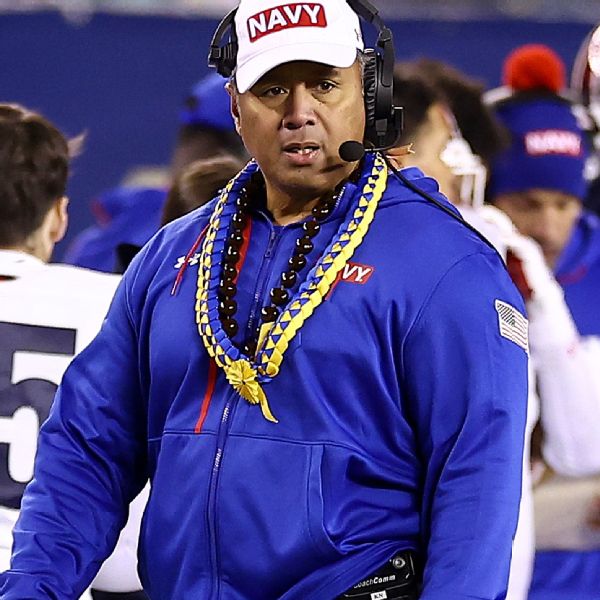 ANNAPOLIS, Md. — Former Navy coach Ken Niumatalolo told ESPN on Monday he was sitting by himself at his locker following the Midshipmen’s 20-17 double overtime loss to rival Army in Philadelphia on Saturday when Navy athletic director Chet Gladchuk walked in and fired him.

“First of all, we just got kicked in the gut,” Niumatalolo said. “I was a little bit numb prior to him saying that, so most of it I couldn’t comprehend. I’m just like, ‘Chet, why don’t you take some time to relax.’ He said, ‘Well, it’s been building up.'”

The two shared vastly different perspectives on a coaching change at a program that isn’t trying to reach the College Football Playoff but annually captures the nation’s attention with the pageantry and tradition of the Army-Navy game. Niumatalolo, who is the winningest coach in program history at 109-83, earned a reputation for graduating his players, his honest approach and avoiding NCAA infractions, and while Gladchuk praised Niumatalolo for the lasting impact he’s had on the Midshipmen, he said the goals are winning the Commander-In-Chief trophy and earning bowl eligibility.

“That’s been the constant bar we strive for, is to achieve those two goals, which I believe are very realistic, very reasonable, and have been consistent for 20 years and therefore this does not come as any surprise,” Gladchuk said. “It’s just an expectation that unfortunately fell short.”

Gladchuk said “without any question of a doubt” the expectations were communicated to Niumatalolo before the season.

“I spoke directly to his representatives who asked me exactly that question,” Gladchuk said. “I conveyed it to them and I conveyed it for 20 years to the head coach … there’s no confusion with regard to what the expectations are. And I think they’re realistic, they’re reasonable, they’re attainable. They’re expected. They’re resourced. I can’t make it any clearer.”

The Midshipmen finished the season with four or fewer wins three seasons in a row and are 2-5 in the past seven matchups with Army and 2-5 against Air Force in the same span. While the three service academies — Army, Navy and Air Force — face similar challenges, Niumatalolo said the inability for even a handful of his players to receive an extra year of eligibility — especially for season-ending injuries and the COVID-19 ravaged 2020 season — made it particularly difficult.

“The other two get it,” he said. “All those others who got their extra year from COVID, I’m not complaining about it — people deserve it. Why weren’t we afforded that opportunity? Especially if the other two were able to do some stuff that way. We were in a once-in-a-lifetime pandemic.”

Niumatalolo said Navy doesn’t redshirt, so he had freshmen and sophomores facing players from the other academies with a sixth year of eligibility from 2020. He said he asked Gladchuk and the Navy superintendent if any players could be granted an extra year of eligibility, but was denied because the government requires the Midshipmen to graduate in four years.

Niumatalolo also said the other academies are done classes at noon, which he said is a significant advantage because the football program can feed the players twice and have meetings. He said Navy’s classes end at 3:20 p.m. and players are sprinting to practice. He asked for the schedule to change, but was told that also couldn’t happen. Gladchuk said a lot of Navy’s guidance comes from the Secretary of the Navy, and conceded the Midshipmen “have to deal with variables that in many cases are not similar.”

“We’ve got to accept that,” he said. “We have to eliminate the distractions and play by the rules we’re dealt and succeed doing just that. What was Air Force, 9-3? They’re playing by the same rules as well.”

With an experienced team that includes 22 returning starters to compete against a vastly different American Athletic Conference with the pending departures of Cincinnati, Houston and UCF to the Big 12, Niumatalolo said he asked to finish the remaining year on his contract.

“And if we lose next year,” he said, “Don’t worry about firing me. I’ll resign. You don’t have to pay me a cent. I’m not looking for a raise, I’m not looking for anything. I just want to finish my contract. We’re finally coming out of the pandemic. I’d be lying if I said I wasn’t disappointed. I thought we stood for something different.”

Gladchuk said the returning experience and conference realignment was all “part of the thought process,” but it was more than that.

Niumatalolo said he isn’t bitter, but he felt like he had to defend himself and explain his record in recent years against the academies.

“I’m a competitor,” he said. “It’s hard for me to think that we got the ball on the six-inch line, and that’s my last game. That’s hard to fathom. If we win, he’s not firing me. How do you fire a guy after you win the Army-Navy game? That’s not going to happen.”

Niumatalolo says Navy fired him immediately after loss to Army