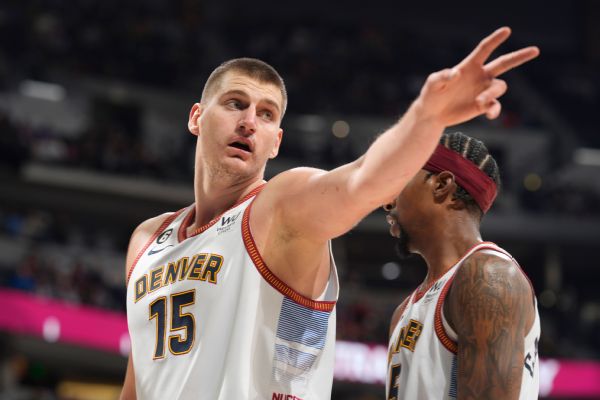 DENVER — Nikola Jokic had 40 points and a career-high 27 rebounds in yet another triple-double to help the Denver Nuggets beat the Charlotte Hornets 119-115 on Sunday night.

Jokic also had 10 assists for his fifth triple-double of the season and 81st overall. He is the third player in NBA history to record at least 40 points, 25 rebounds and 10 assists in a game, joining Wilt Chamberlain, who did it four times, and Elgin Baylor.

Jokic, who joined Dallas’ Luka Doncic as the second player with a 40-point triple-double this season (Doncic has three), sealed Denver’s victory on Sunday with two free throws with 13 seconds left.

Nuggets coach Michael Malone said he didn’t realize the numbers Jokic was putting up during the course of the game, particularly the amount of rebounds.

“I didn’t know it was a 40-27-10 night but I knew he was having another Nikola Jokic stellar performance, efficient,” Malone said. “And it’s not just about Nikola. It’s about his ability to make every one of his teammates better. Yeah, Nikola is a generational talent.”

Jokic’s rebounds supercharged the other aspects of his game, helping the Nuggets get defensive stops and igniting Denver’s transition game with quick outlet passes to teammates off the rebounds. But many of the rebounds also came from just happening to be in the right place at the right time, Jokic said.

“To be honest, I think it’s because of our defense and I was just in the right spot to rebound the ball,” Jokic said. “It’s not that I was grabbing for them or whatever, chasing for them. It just happened, you know? I wish it could be every night, to be honest.”

Kentavious Caldwell-Pope added 20 points, and Aaron Gordon had 19 as the Nuggets sent the Hornets to their eighth consecutive loss.

Jokic had 20 rebounds in the first half, the first player with a 20-rebound half since Dwight Howard in 2018.

Charlotte fought back, though, getting to 107-104 on Ball’s fadeaway jumper with 3:29 remaining. The Nuggets regained a cushion when Gordon went in for a reverse layup off a feed from Jokic before Jokic put in a hook shot on the Nuggets’ ensuing possession for a 111-104 lead with 1:57 remaining.

Jokic completed the triple-double with a pass setting up Bruce Brown‘s 3-pointer that gave Denver an eight-point advantage with 1:20 left. The 40-point triple-double was the third of Jokic’s career; the only other Nuggets player to do this is Michael Adams.

But again Charlotte got back within two on a dunk by Washington before Jokic hit a pair of free throws, and Charlotte could not get a shot off in the final moments after turning the ball over.

In his past three games, Jokic has recorded a combined 108 points, 52 rebounds, 26 assists and 11 steals, becoming the first player with 100 points, 40 rebounds, 20 assists and 10 steals over a three-game span since steals became official in 1973-74.

ESPN Stats & Information and The Associated Press contributed to this report.