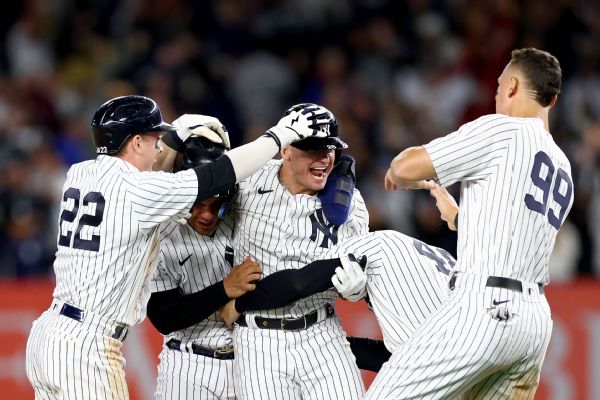 With pinch-runner Marwin Gonzalez at second as the automatic runner, Kaleb Ort (0-2) intentionally walked Gleyber Torres before Donaldson grounded a single just past diving shortstop Xander Bogaerts and into left field, giving the Yankees a 5-4 walk-off win over the Boston Red Sox and another postseason berth.

New York has a 7 1/2-game lead in the AL East over Toronto and is headed to the playoffs for the 24th time in 28 years.

“A great accomplishment. A lot of hard work over the course of the season to get to this point,” Judge said. “But I think you could ask anybody in this room: The job’s not finished. We have an ultimate goal of going out there and winning our division, and setting ourselves up for the postseason. And this is step No. 1, step No. 1 of many steps to come.”

Judge had walked three times and struck out once before he came to the plate with the score tied 4-all in the ninth. The crowd of 43,123 was on its feet for every pitch, and Judge drove a 2-2 fastball from Matt Barnes just to the right of straightaway center.

“I just got underneath it a little bit,” Judge said. ” A pretty windy night, so I was hoping maybe it was blowing out at the time I was hitting, but just missed it.”

The ball left the bat at 113 mph, and fans waited in anticipation as Judge jogged toward first base. But they groaned in unison as Kike Hernandez made the catch a step in front of the fence, not far from the 408-foot sign — leaving Judge still one home run shy of the American League record set by Yankees slugger Roger Maris in 1961.

“I thought that ball was gone.”