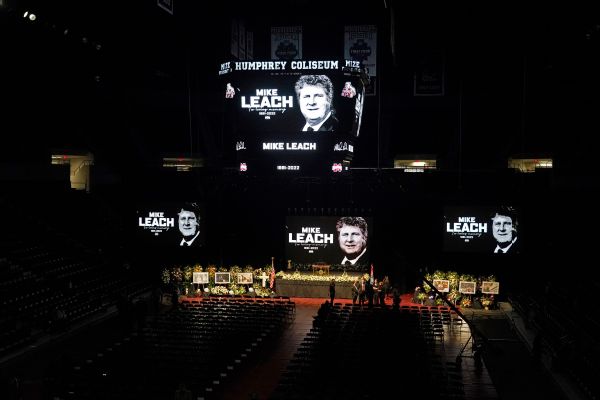 STARKVILLE, Miss. — Former Mississippi State coach Mike Leach was a luminary and a larger-than-life character in college football. On Tuesday, his impact was spelled out in detail as friends, coaches and players shared personal stories of Leach’s humanity, his sense of humor and the deep curiosity that drove him to the highest levels of the sport.

Leach died on Dec. 12 at the University of Mississippi Medical Center in Jackson from a heart condition. He was 61 years old.

At Humphrey Coliseum on a rainy Tuesday afternoon, Mississippi State held a memorial for its departed head coach with some of college football’s most recognizable figures in attendance. SEC commissioner Greg Sankey, former Oklahoma coach Bob Stoops and USC coach Lincoln Riley were some of those who eulogized Leach.

Many of his protégés, including TCU coach Sonny Dykes and Houston coach Dana Holgorsen, traveled to Starkville for the memorial. Some of his competitors in the SEC, including Ole Miss coach Lane Kiffin and Arkansas coach Sam Pittman, came to pay their respects as well.

As the service was about to begin, Frank Sinatra’s “My Way” played over the sound system. It was quickly apparent with every speaker who came on stage that Leach, who was born in California and raised in Wyoming, had carved his own path — from college rugby player to Power 5 head coach.

Many in attendance wore cowbell-shaped pins on their suit jackets. Inside the cowbell was a skull and crossbones, a nod to Leach’s nickname, Pirate.

Mississippi State president Mark Keenum recalled meeting Leach for the first time before he was hired as head coach in January 2020. Keenum said he was struck by Leach’s “intense curiosity.” Keenum said that not only did Leach want to learn about anything and everything, he wanted to share what he’d learned.

Keenum said Leach, who taught seminars and wrote a book about Geronimo, wasn’t satisfied with the College Football Playoff’s decision to expand from four to 12 teams. So he lobbied Keenum, the chair of the CFP board of managers.

Laughter rippled through the coliseum. Keenum smiled and said they agreed to disagree.

“He was not the typical Power 5 football coach,” Keenum said. “But as we all know, Mike Leach was anything but typical.”

Sankey said there was no such thing as a brief, 15-minute conversation with Leach, and they never spoke about only one thing. Leach was informal, showing up to work often in cargo shorts and flip flops. Sankey said Leach spoke to him at SEC media days once and asked why neckties were still a staple of fashion when powdered wigs had fallen by the wayside.

Leach was rare in that he didn’t play college football. He got his undergraduate degree from BYU, his master’s degree from the U.S. Sports Academy and his Juris Doctor from Pepperdine. His first three jobs in football were offensive line coach at Cal Poly, linebackers coach at College of the Desert and head coach of the Pori Bears in Finland.

His big break came in 1989 when he connected with Hal Mumme at Iowa Wesleyan. Together, they’d create the pass-happy offense known as the Air Raid.

Leach followed Mumme to Valdosta State and then to Kentucky. He left to become the offensive coordinator at Oklahoma, and after one season, he got the head coaching job at Texas Tech.

At Texas Tech, Washington State and Mississippi State, Leach compiled a record of 158-107. Ten times his offenses led the FBS in passing. But his impact went far beyond the record books. His coaching tree features more than a dozen current and former college head coaches.

There wasn’t a subject Leach wouldn’t talk about. He had strong opinions on the existence of Bigfoot, which Halloween candy was best and who would win in a battle of college mascots.

Former Washington State quarterback Gardner Minshew said his favorite thing about Leach was his authenticity. It was part confidence, he said, and part not caring what anyone thought of him. Leach was unapologetically himself. Minshew, who spent less than a year with him in Pullman, said of Leach, “He changed my life.”

And it all started with the simple question, Minshew recalled, “Do you want to lead the country in passing?”

Minshew was a little-known junior college quarterback when Leach recruited him as a graduate student. Minshew wound up breaking the school record for passing yards in a single season (4,776) and was drafted in the sixth round by the Jacksonville Jaguars.

Former Oklahoma coach Bob Stoops called Leach a bold and innovative thinker. When Leach left his staff at Oklahoma to become head coach at Texas Tech, Stoops said the Air Raid began to “spread like wildfire” to all levels of football — high school, college and the NFL.

But what Stoops said few people got to see was how competitive and demanding he was. Stoops addressed the Mississippi State players in attendance and said how proud Leach would have been of their season and their decision to play in the bowl game.

USC coach Lincoln Riley recalled hitching a ride with Leach one day at Texas Tech when the actor Matthew McConaughey called. Leach got so lost in the conversation, Riley recalled, that he nearly sideswiped a truck on the road and didn’t notice.

Riley laughed, and a moment later he had to fight back tears thinking about Leach’s impact on his life and his family. Leach took a chance and gave Riley his start — first as a student assistant, then as a graduate assistant and finally as a receivers coach at Texas Tech.

Riley said Leach’s legacy will go beyond funny stories and an innovative offense. It was about the relationships he built and how he built them.

“He truly did invest in other people. And it’s a great reminder for us all,” Riley said. “Rest in peace, my friend. There will never be another one like you.”

Leach is survived by his wife, Sharon; his children, Janeen, Kim, Cody and Kiersten; and his three grandchildren.

Mississippi State will play Illinois in the ReliaQuest Bowl on Jan. 2.