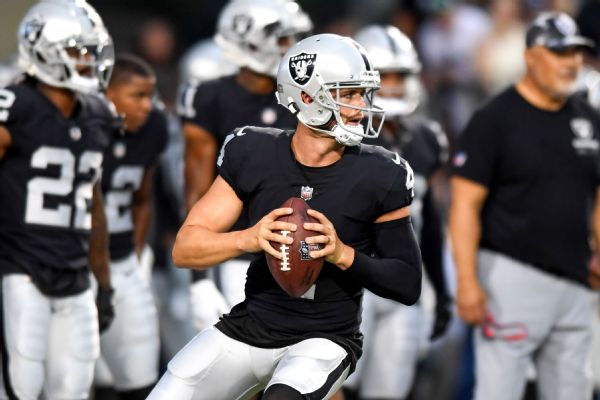 HENDERSON, Nev. — The Las Vegas Raiders‘ Derek Carr, whose quarterback rating has dropped precipitously the past four times the team has changed offensive playcallers, acknowledged Wednesday that he is still getting accustomed to first-year coach Josh McDaniels’ system.

“I feel so much more comfortable than I did, like, a month ago,” said Carr, whose QBR of 40.6 through two games is his lowest since his rookie year of 2014.

“I mean, when you get out there and you do it, it’s different from the sideline. Training camp’s different, right? There’s a different clock in the game because now I’m getting hit. I can turn the film on and I have experience from that point of view, in the system. I have experience hearing his voice, knowing what [McDaniels] wants me to get to. … I want to go to exactly what he wants. … That’s going to grow, obviously, but small sample size, first two games. Hopefully, I’m doing some of those things where [McDaniels is] like, ‘Yup, that’s what I thought. Next play.'”

The Raiders are 0-2 after last-second losses at the Los Angeles Chargers and at home against the Arizona Cardinals, starting slowly in Inglewood and finishing lackadaisically in Las Vegas in blowing a 20-0 halftime lead. They play at the also-winless Tennessee Titans on Sunday.

That’s the kind of offensive production many foresaw for Carr and McDaniels.

Yet, as receiver Davante Adams said, “That’s not how a football game works” in real life.

“Every player, you’ve got to learn how to put the foot on the gas and, for lack of better words, break their necks when you have them in a corner like that,” said Adams, who went from 17 targets at the Chargers to 12 receiving yards against the Cardinals.

Last year, with Gruden resigning after five games in the wake of his email controversy, Carr’s QBR fell from a career-high 64.3 in 2021 to 52.4 with Greg Olson calling the plays after Gruden left.

McDaniels said he is “very comfortable” with Carr’s comfort level at this stage of the season.

“He processes it so quickly and then can go out there and execute it,” McDaniels said. “Each week is a little different. It may not be the same exact stuff that we’re doing offensively, defensively or in the kicking game that we did last week. And I think for some people — and again, I wasn’t here, I haven’t been where everybody else has been, so I don’t really know — but I know that for some people in different systems with different coaching staffs, that that’s not necessarily as big of a thing.”

Adams said it is incumbent on his teammates to keep Carr at ease.

“There are so many things that goes into playing quarterback, man, it’s tough,” Adams said. “Second play of the game, he’s getting hit. Obviously, that’s something that we all got to work on because that helps Derek to be able to do his job and be comfortable back there. Same thing, he’s not going to be that comfortable throwing the ball if the wide receivers are dropping the ball every single play or … if it’s not great calls.

“That’s the toughest position on the field to play. So, I’m damn sure going to the best of my abilities to try to help him make his job as easy as possible … everyone doing their job to make sure he stays clean and has a clear mind to be able to sit back and deliver.”

Said Carr: “This far along in my career, hopefully I can be able to grab it fast and see something and do what [McDaniels is] teaching me. Again, I’m not perfect, by any stretch … but I’m trying my best just to execute it exactly as he sees it.