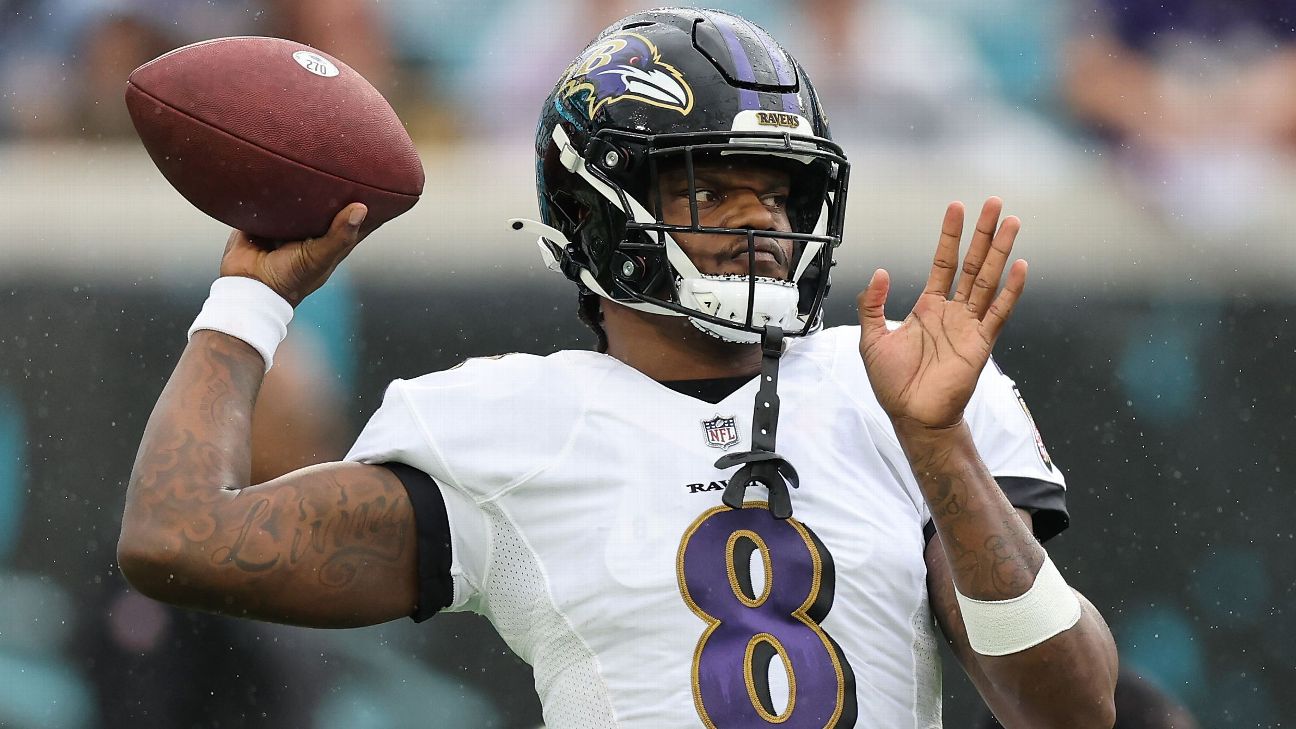 Baltimore Ravens quarterback Lamar Jackson may not play again until Christmas Eve as he continues to recover from a knee injury, league sources told ESPN.

Jackson is dealing with a sprained PCL, according to sources, an injury that often sidelines players from one to three weeks.

The former league MVP is officially listed as doubtful and is not expected to play Sunday against the AFC North rival Steelers, and it will be challenging for Jackson to return in time for next week’s game against the Browns, though the Ravens still are holding out hope, according to sources.

Jackson’s most realistic return date, as of Sunday, would be Baltimore’s Saturday afternoon game on Christmas Eve against the Falcons, according to sources. There also is a strong chance Jackson will not be at full strength for the rest of the regular season, at least.

Other players who have battled PCL sprains have struggled to regain their pre-injury form in the time shortly after their injury.

Cowboys running back Ezekiel Elliott played through his sprained PCL last season, and was not the same player. Jets quarterback Zach Wilson missed four games this season with a sprained PCL, and Cowboys tight end Dalton Schultz did not produce the way he had before he injured a PCL earlier this season.

Jackson typically has been a quick healer and played through other nagging injuries, but sources familiar with this injury believe it will be difficult for the two-time Pro Bowler to be the same type of dangerous and explosive quarterback he was before his injury.

For as long as Jackson is sidelined, the Ravens plan to start quarterback Tyler Huntley, who posted a 1-3 record last season when filling in as Baltimore’s starting quarterback. The Ravens promoted quarterback Anthony Brown from their practice squad Saturday.

The Ravens insist the offense doesn’t change with Huntley, who is a dual-threat quarterback like Jackson. As a starter, Huntley has completed 64.7% of his passes for 772 yards with two touchdowns and four interceptions. He also has rushed for 239 yards on 38 carries, averaging 6.29 yards.

“The more reps [you get], the more confident a person feels,” Huntley said this past week. “That plays a lot into it.”

In the 10-9 victory last Sunday over the Broncos, Huntley filled in for Jackson for the final three quarters and ran in the 2-yard winning touchdown with 28 seconds remaining.