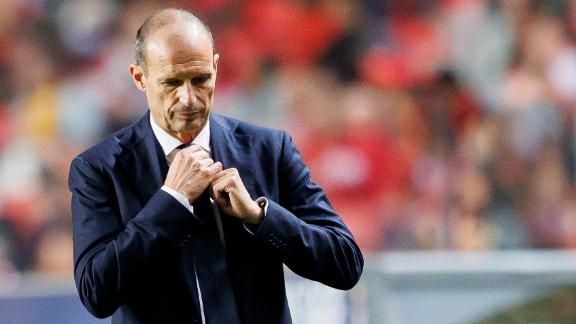 Juventus coach Massimiliano Allegri says his side are “sorry and angry” following their 4-3 Champions League loss at Benfica on Tuesday as they miss out on the knockout rounds for the first time since 2013/14.

The defeat means struggling Juve can only finish third in Group H, which would earn them a place in the Europa League knockout stages.

“More than the wrong approach, I think we were too soft in defence in the first half,” Allegri told reporters. “We are disappointed and angry because we are out of the Champions League.

“Now we have to focus on the [Italian] league and also remain focused against Paris (Saint-Germain next Wednesday) because we have at least to book a place in the Europa League.

“We made too many mistakes tonight but it’s not useful to talk about that now. I don’t consider this a failure. In football there are also defeats.

“We are sorry and angry. The team finished well so it’s not a physical matter. We must continue working.”

It has been a poor season so far for Juve in Serie A as they languish in eighth place, 10 points off top spot, but Allegri hopes the players will take the battling spirit they showed in Lisbon into the domestic competition.

“Now let’s think about Serie A, let’s start from the last 20 minutes [of this game] and try to win at Lecce [on Saturday]. We must make the effort and continue to work to remain in the championship [race],” Allegri said.

“In the league we have four games before the [World Cup] break. We have to recover our energy, and with the players I have available we must do well.”

The coach brought on a trio of teenagers in the second half on Tuesday and all caught the eye, something he says bodes well for the future.

“I’m happy with the guys, they have quality. Fabio Miretti has played many games, Matias Soule and Samuel Iling entered well.

“We could have made better use of some opportunities at the end. But they gave that mental energy the team needed.”