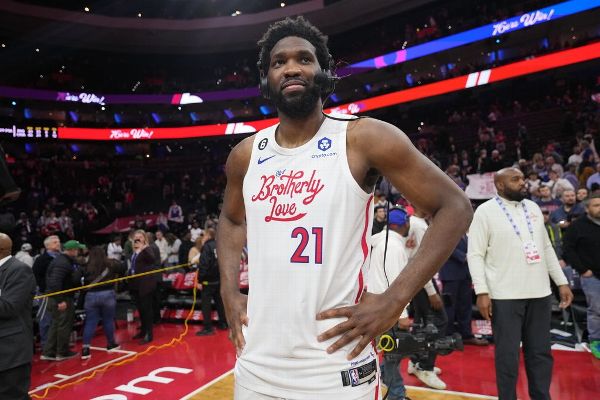 PHILADELPHIA — Joel Embiid had 53 points and 11 rebounds, leading the Philadelphia 76ers to a 131-113 win over the Charlotte Hornets on Sunday night.

With the home crowd serenading him with “MVP!” chants, Embiid posted his second 50-plus point performance of the season and the fourth 50-plus point game of his career. It is also the 30th game in Embiid’s career with 40 points and 10 rebounds. The only other player in franchise history to accomplish that feat was Wilt Chamberlain.

Charlotte was led by Kelly Oubre Jr. and Terry Rozier, who each scored 29 points. The Hornets have lost five straight games

Embiid took the game over in the final three minutes of the second quarter, scoring 15 of his 28 first-half points in that stretch by exploiting a mismatch against Hornets forward Mason Plumlee. On one play, Embiid drove down the left side of the lane, extended high over Plumlee and threw down a thunderous dunk that charged up the Wells Fargo Center crowd.

The 76ers scored a season-high 41 points in the second quarter.

Charlotte stayed within striking distance through the early part of the fourth quarter, thanks to Oubre and Rozier, who were able to drive the lane and get easy looks while being helped by 15 offensive rebounds.

But Embiid put the game out of reach by scoring 14 points in the fourth quarter before being pulled with two minutes left. He finished 20 for 32 from the field and hit all 11 of his free throws.