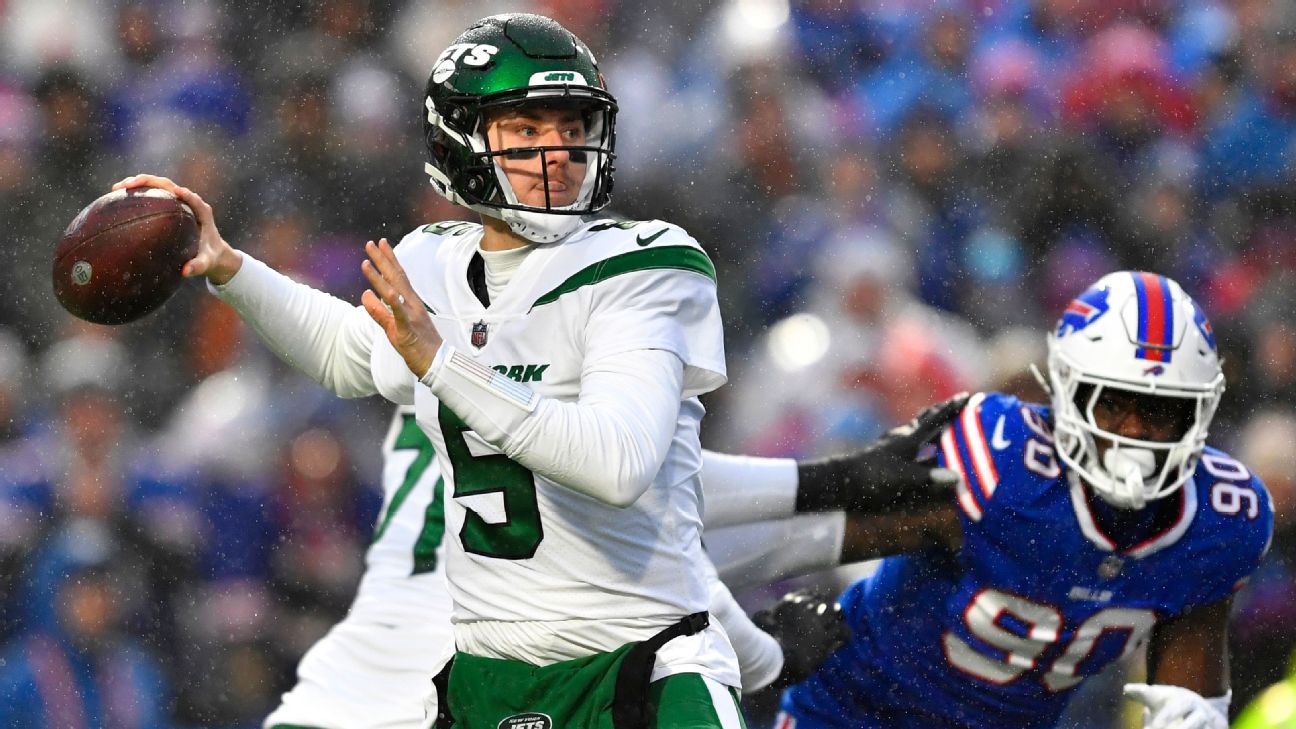 FLORHAM PARK, N.J. — The New York Jets expect to have banged-up quarterback Mike White for their critical game Sunday against the Detroit Lions, but they’re not so sure about star defensive tackle Quinnen Williams, who is considered 50-50 with a calf injury.

White has undergone a battery of tests for a rib injury, including X-rays and a CT scan. The Jets declined to disclose the specific nature of the injury, but coach Robert Saleh sounded confident that White will start for the fourth time since replacing the demoted Zach Wilson.

“We’re proceeding as if he’s going to be a full participant [in practice] and play in the game on Sunday,” Saleh said Monday.

White absorbed two vicious blows Sunday in a 20-12 loss to the Buffalo Bills, forcing him to the sideline after each one. The latter hit — a full-speed shot to the ribs by linebacker Matt Milano — sent him to the locker room for X-rays.

Somehow, he finished the game, going directly from Highmark Stadium to a local hospital via ambulance for precautionary tests for internal injuries. He was cleared to fly home with the team.

“I feel good,” White said Monday. “I don’t feel like a hundred bucks because I just played a football game, but I feel good. Picked my kids out of their cribs this morning and played with them a little bit. They tackled me. I feel fine. I feel good.”

Lions defensive end Aidan Hutchinson hits harder than White’s 1-year-old twins, so there has to be some concern for the Jets (7-6). White, who said he’s prepared to wear a flak jacket, knows there can be a fine line between player safety and the desire to play. He said that will be discussed with team doctors at the proper time.

White, who has endeared himself to teammates with his toughness and outgoing personality, said he had no intention of sitting out the fourth quarter against the Bills.

“I knew, if everything was fine, I was going in,” White said, adding that the X-rays at the stadium were negative. “You would’ve had to peel me off the field. It was never in my mind that I’m not finishing this game.”

White completed 27 of 44 passes for 268 yards with no turnovers despite intense pressure from the Buffalo pass rush, although he led the offense to only one touchdown for the second straight week. The first hit that sent him to the sideline, delivered by defensive tackle Ed Oliver, wasn’t as hard as it looked, he said. The Milano hit, he acknowledged, was nasty.

“That’s football,” he said. “That’s the part you don’t miss during [the game] because it hurts, but there’s part of it you do miss because you do want to prove to your guys, ‘Look, I’m willing to hang in there and take the hits necessary to move the ball down the field’ and show them you’re willing to lay it all out there for them.”

Saleh was effusive in his praise of White, who could wind up starting the final four games.

The Jets may have a new backup quarterback this week. Joe Flacco was ineffective in six snaps, fumbling on a strip sack, and could be replaced by Wilson, who was inactive for the third straight game. Saleh was noncommittal, saying the coaching staff will discuss the matter.

“Zach has been working hard the last couple of weeks and he’s in a great mental space, so he’s ready for whatever we ask of him,” said Saleh, who called Wilson’s benching an opportunity to “reset” as the scout-team quarterback.

In other injury developments, wide receiver Corey Davis, who suffered a head injury Sunday, is in the concussion protocol, but he showed improvement Monday and there’s hope he can play against the Lions. There was less optimism for Williams, whose career year was interrupted by a second-quarter calf injury. He didn’t return to the game.

Williams, considered day-to-day, recorded his 10th and 11th sacks, tying him with the Kansas City Chiefs‘ Chris Jones for the most by an interior defensive lineman this season. Williams is “one of the best players in the league,” according to Saleh, who said he will have a better handle on the injury in a few days.