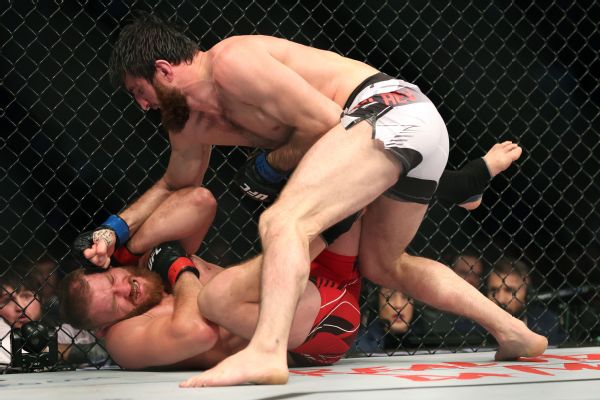 LAS VEGAS — The UFC lost its light heavyweight champion Jiri Prochazka to injury in November. UFC 282 was supposed to crown his successor. Unfortunately, it did not.

Former champion Jan Blachowicz (29-9-1) and Magomed Ankalaev (18-1-1) fought to a five-round split draw in the main event of UFC on Saturday inside T-Mobile Arena. Judge Mike Bell scored the bout 48-47 for Blachowicz, while judge Derek Cleary had it 48-46 for Ankalaev. A third judge, Sal D’Amato, scored it 47-47, resulting in the split draw.

Ankalaev, of Dagestan, who was heavily favored going in, adamantly said he felt he won.

With the light heavyweight title still vacant after the draw, UFC president Dana White announced in the postfight news conference that former champ Glover Teixeira will face Jamahal Hill for the belt at UFC 283 next month. Teixeira watched the title fight from the front row Saturday.

Prochazka (29-3-1), 30, is out indefinitely with a severe shoulder injury, which he just suffered last month. He willingly gave up the belt in order to allow the division to move on. He is expected to be out at least until mid-2023.

The championship bout was defined by a major swing of momentum around the fourth round. Blachowicz had badly hurt Ankalaev’s lead right leg with kicks in the second round, forcing Ankalaev to abandon his natural southpaw stance and fight primarily orthodox. Blachowicz continued to pepper Ankalaev’s legs with success.

In the fourth round, however, Ankalaev turned almost exclusively to a wrestling-based strategy. He shot into Blachowicz’s hips and held him against the fence. Eventually, Blachowicz appeared to get fatigued from the grappling and spent much of the final two rounds off his back. Again, the fifth round was particularly dominant for Ankalaev.

According to UFC Stats, Ankalaev outlanded Blachowicz 182-79 in total strikes. He also racked up more than 11 minutes of control time, compared with zero for Blachowicz. Ankalaev was successful on only two of 10 takedown attempts; Blachowicz did not attempt a single takedown.

The draw interrupted a nine-fight winning streak for Ankalaev. Blachowicz surrendered the title to Teixeira in a submission loss in 2021, but rebounded with a TKO win over Aleksandar Rakic in May.