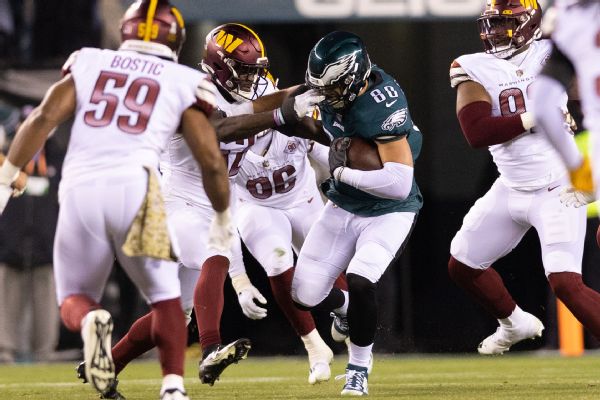 Washington Commanders linebacker Jamin Davis was fined $10,609 and Jacksonville Jaguars safety Andre Cisco was fined $6,612 for plays that led to injuries during Week 10.

Davis’ fine came from the face mask that led to a shoulder injury for Philadelphia Eagles tight end Dallas Goedert on Monday. During the fourth quarter, Davis clearly grabbed and pulled Goedert’s face mask as he attempted to tackle him, and a simultaneous hit by defensive tackle John Ridgeway knocked the ball loose. Ridgeway’s full weight was on top of Goedert as he was driven to the ground, with his left shoulder absorbing much of the impact.

Goedert was placed on injured reserve Wednesday, ruling him out for at least four games. No flag was thrown on the play, which ended with a Commanders fumble recovery en route to the Eagles’ first loss of the season.

Cisco was also part of another disputable non-call when he hit Kansas City Chiefs wide receiver JuJu Smith-Schuster high on a second-quarter reception. Smith-Schuster was placed in the concussion protocol and will miss Sunday’s game against the Los Angeles Chargers.

A flag was initially thrown on the play before referee Brad Rogers announced there was no penalty after a discussion on the field. The decision drew frustration from Chiefs coach Andy Reid and several players, including quarterback Patrick Mahomes.

Information from ESPN’s Tim McManus and Adam Teicher was used in this report.