Grading the Sean Murphy trade — how did the Braves, Athletics and Brewers do?

The trade: A three-team deal that lands C Sean Murphy with the Braves

What’s intriguing here is the Braves already had two All-Star catchers on their roster in 2022, Travis d’Arnaud and Contreras (who started the All-Star Game at designated hitter, but also started 57 games behind the plate for the Braves). So why trade six players for Murphy?

Well, to start, he’s also really good. Offensively, Murphy hit .250/.332/.426 in 2022, ranking seventh among catchers in wRC+. And moving to Atlanta should provide a nice offensive boost: Over his career he has a .684 OPS in Oakland and .820 on the road. Look for him to improve on the 18 home runs he hit with the A’s. To top it off, the Braves still have three years of team control of Murphy, who adds to their already impressive collection of under-30 talent, as my ESPN colleague Paul Hembekides points out:

Indeed, it would be no surprise to see the Braves sign Murphy to a long-term extension, similar to what they did last season when they acquired Matt Olson from the A’s.

The Braves did give up a good hitter in Contreras, who hit .278/.354/.506 in 97 games with an excellent hard-hit rate (84th percentile) and max exit velocity (97th percentile). He has a lot of swing and miss in his game, but takes some walks — essentially, he profiles similar to his older brother, Willson. Like his brother, his overall defensive chops are the big question — and clearly the Braves had enough concerns that they wanted to upgrade with Murphy, an outstanding defensive catcher. Murphy rates well in pitch framing and viewed as a strong leader for a pitching staff. With d’Arnaud and Murphy, the Braves now have two of the top six in Statcast’s leaderboard for catcher framing runs saved from 2022.

On top of that, Contreras threw out just 14% of basestealers in 2022 — and with new rules limiting pickoff throws and increasing the size of bases, that weakness might be further exploited in 2023 (d’Arnaud has also had issues throwing out runners in the past, although was better in 2022 at 25%, the same as Murphy). 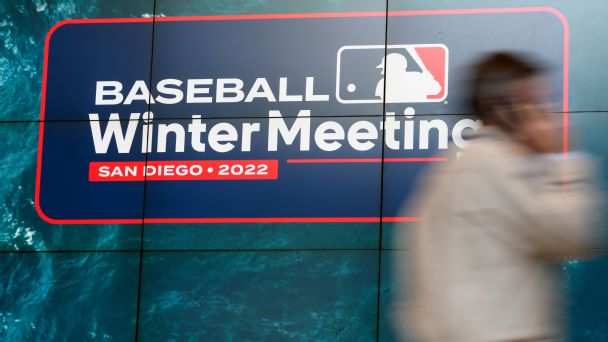 Money has been flowing this offseason, with some of baseball’s biggest names cashing in.

Takeaways from the winter meetings »

Inside the WM’s $1.6 billion spending spree »

Judge is back! How do Yankees get better this winter? »

Contreras turns 25 in a couple weeks, so he’s young enough to improve in these areas, but the Brewers got him for his bat, not his defense. Their catchers hit just .202/.292/.316 with 12 home runs, so Contreras projects as a clear upgrade. Indeed, his .860 OPS last season was higher than any player on the Brewers, so he should slide into the middle of the order. It’s a nice pickup for the Brewers to fill a weak hole in the lineup — and they did so without having to give up a key member of the 2023 team.

Maybe that’s underselling Ruiz a bit. He came over to the Brewers in the Josh Hader deal, and his minor league numbers were some of the most impressive of 2022: .332/.447/.526 with 16 home runs and 85 stolen bases between Double-A and Triple-A. He even had acceptable plate discipline with 66 walks and 94 strikeouts. He’s a divisive prospect, though. While that stat line makes him look like a speedster with some pop, his exit velocities in the minors are weak, and some analysts don’t think he’ll hit for much power in the majors. He’s certainly an exciting prospect, especially if the run game does return to the sport as some believe, but his ceiling might ultimately be more of a fourth outfielder.

Muller and Tarnok were part of the Braves’ enviable starting pitching depth, both having already reached the majors — exactly the type of prospect the A’s love to seek out. Muller is a big 6-foot-7 lefty with a plus changeup who finally corralled some of the control issues that had plagued him in the past, at least in Triple-A, where he cut his walk rate from 4.7 per nine in 2021 to 2.7. He’s made 11 career starts in the majors and has a 5.14 ERA, but there’s mid-rotation potential if he can throw enough strikes. Tarnok had a 4.05 between Double-A and Triple-A. He’s been a favorite sleeper prospect of mine for a couple years, but he’s going to have to improve his command and cut down on the home runs.

In fact, the real sleeper here might be Salinas, a burly right-hander who fanned 175 batters in 109 innings as a 21-year-old in Class A, touching 98 mph with his fastball. He walked too many (63) to be viewed as anything but a wild card right now, but he’s reasonable gamble for a team like the A’s.

Baseball America recently ranked Muller as the Braves’ No. 1 prospect, Salinas No. 7 and Tarnok No. 9, while MLB.com had Ruiz as the No. 9 prospect for the Brewers (behind four other outfielders). There is a certainly a path to the A’s having added significant depth in this deal — if those four pan out. But there’s also the more likely scenario where they didn’t acquire any star power while trading away a very valuable player in Murphy.

The Braves look like winners here, even while trading away three of their top-10 prospects plus Contreras. Obviously, they believe Murphy is going to provide a major defensive upgrade. It’s hard to fault anything the Braves have done the past couple of seasons, and with d’Arnaud a potential a free agent after 2023, they have their catching position shored up through 2025. The Brewers make a significant addition without giving up much — especially since they have a bunch of other outfielders ready to make an impact in the majors. Contreras has five years of team control and could be a 30-homer cleanup hitter in that park. If that’s the case, the Brewers will live with some of the defensive shortcomings happily.

As for Oakland fans…well, they knew a Murphy a trade was coming, but it doesn’t make it any easier to accept. The A’s always prefer quantity in their deals and maybe this works out that way — if they get four 2-WAR players, that’s an important depth for an organization like Oakland. But I would have liked them to get at least one sure-fire prospect, and I’m not sure they did.

Grading the Sean Murphy trade — how did the Braves, Athletics and Brewers do?