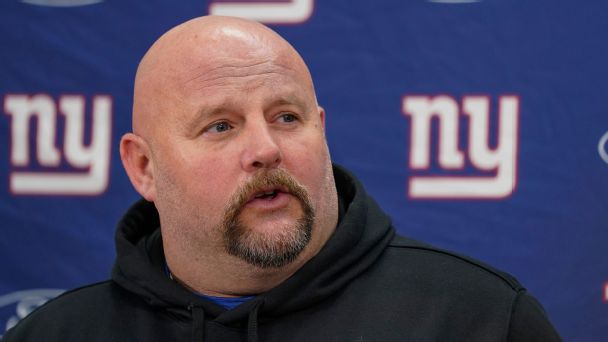 New York Giants coach Brian Daboll is willing to do anything for a win — including shaving part of his trademark beard for Sunday night’s massive matchup with the Washington Commanders.

The Giants won 20-12 in dramatic fashion on Sunday night and now Daboll is stuck. He has no choice but to displease his wife and kids, for the betterment of his football team.

“Well, look, I try to change things up when things aren’t going well,” Daboll said on Monday. “That includes looking like this, which trust me, my wife and daughters, they’re not very happy about that.

Brian Daboll walked off the podium last night and crossed paths with QB Daniel Jones. They embraced. Daboll gave him a bro-hug and told him he was proud and DJ did a great job.

Jones told Daboll “now you got to keep [the goatee]!” pic.twitter.com/OE3abUEXVZ

“But I try to do anything for a win. So, it was almost a mustache. I gained about — I don’t know how many pounds — the last couple weeks. So, I kept a little bit of the goatee on there [to] cover up some of the other parts. There’s a lot of parts.”

Really, he has no choice but to keep the goatee. The Giants (8-5-1) needed every ounce of good fortune and generous calls from the officials against Washington.

His quarterback won’t let him change it, either. After Daboll’s postgame press conference on Sunday night, he crossed paths with Daniel Jones. They shared a hug, and Daboll lauded his quarterback for his effort.

That’s when Jones told his coach: “Now you got to keep the goatee!”

Jones repeated it for good measure. Maybe just in case Daboll was contemplating shaving it all off or doing something even more drastic.

Anyway, there is absolutely no way someone as superstitious as a football coach would think of making that kind of change after his Giants won for just the second time in six games.

“Absolutely,” Daboll said about keeping the new look. “Unfortunately for everybody else.

“Not really sure [the facial hair] really makes the difference but change it up. There’s a lot of skin underneath that beard, but so be it.”