Flames’ Chris Tanev helped off after slap shot to head 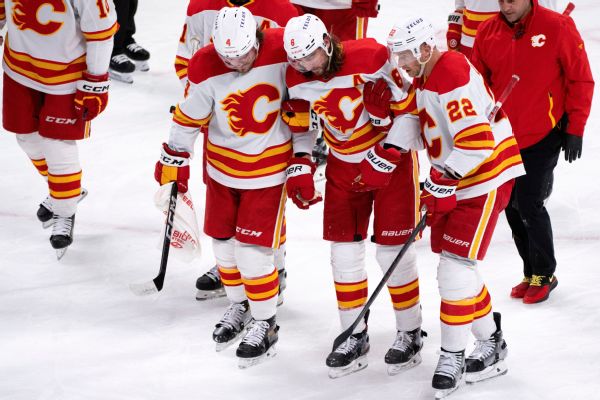 MONTREAL, Quebec — Flames defenseman Chris Tanev was helped off the ice after taking a slap shot to the head in the second period of Calgary’s 2-1 shootout loss to the Montreal Canadiens on Monday.

During a 5-on-3 penalty kill, Tanev attempted to block a slap shot from Canadiens captain Nick Suzuki. The shot hit Tanev in the side of his head. He fell on the ice as the Bell Centre crowd went silent.

The Flames announced following the game that Tanev was sent to the hospital and his tests were negative, allowing him to travel back to Calgary, where he will be reevaluated.

“It’s tough, I mean, he doesn’t stay down very often,” Calgary goaltender Jacob Markstrom said. “So when he stays down, you’re worried. I haven’t talked to him after, but hopefully he’s OK.”

Although Montreal still possessed the puck, Canadiens right-winger Joel Armia asked the referees to whistle the play dead so Tanev could get medical assistance.

After team medics examined Tanev, he skated off the ice with help from his teammates. Before the injury, Tanev had 11:43 of ice time with one shot on net.

“I just talked to Tanev. I know the feeling and I know the sound,” Calgary coach Darryl Sutter said. “I told the players, the toughest guy in the building is Chris Tanev, let’s go do it for him.”

The Flames were left with five defensemen for the remainder of the game.

Tanev, 32, has five assists, four penalty minutes and a minus-1 rating over 23 games for Calgary this season.

Flames’ Chris Tanev helped off after slap shot to head