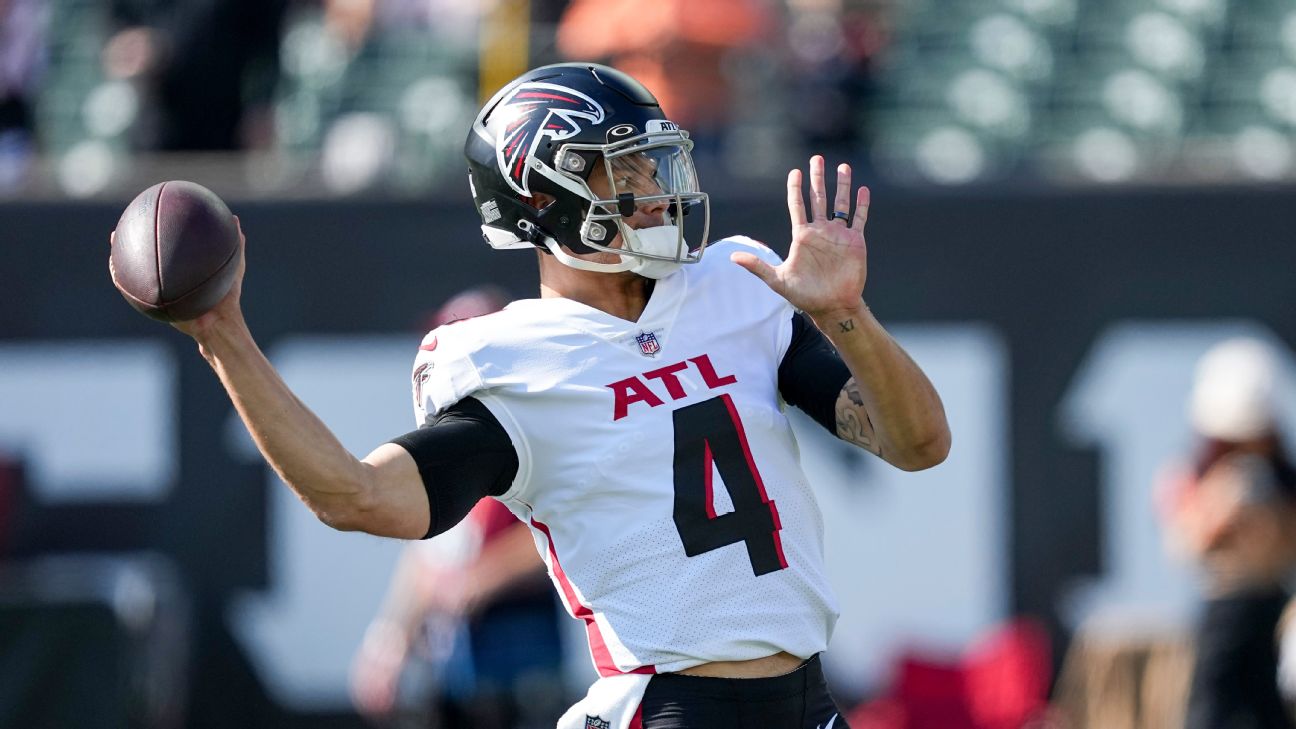 FLOWERY BRANCH, Ga. — The Atlanta Falcons have officially made a move at quarterback, naming rookie Desmond Ridder the starting quarterback for the rest of the season, replacing veteran Marcus Mariota.

“It was a performance-based decision,” Falcons coach Arthur Smith said Monday. “Obviously where our circumstances are, we talked last time about trying to get over the hump in some of these close games and where we try to push the offense.

“We feel like that this is the best decision where he’s at, where the team’s at, as we prepare to go down to New Orleans.”

The Falcons signed quarterback Logan Woodside off the Tennessee practice squad — he has familiarity with Smith and his offense — to provide depth behind Ridder because Mariota is not at the team facility as he is getting a chronic knee issue looked at.

Mariota is currently not at the Falcons facility and Smith said he did not know if or when Mariota would return to the facility. Smith said the knee issue had nothing to do with the decision to go from Mariota to Ridder and Smith anticipates Mariota will eventually go on injured reserve.

“The last month or so, we’re in some of these close games,” Smith said. “Where we’re at in the season, where I thought we were trending.”

Smith stressed multiple times they felt they were close offensively but “have to get over that hump.” That combined with the growth the team saw in Ridder over the last month helped push this move to handle the full game plan.

Atlanta has lost four of its last five games but is one game back in the NFC South at 5-8. The Falcons have scored more than 20 points in just one of the last five games.

Smith said they would have had to potentially change a game plan had they had to play Ridder earlier in the year, but believe he is in a better spot now.

“You’re always looking at it. The last month or so we’ve been in plenty of close games and one of those things we need to see evolve in the passing game as we evolve this season,” Smith said. “I like the progress we’ve made in the running game. I think it’s something we think can benefit us, not only in the short term but in the long term.

The Falcons drafted Ridder in the third round of this year’s draft and worked him with a clear plan. Ridder worked behind Mariota throughout training camp and Ridder told ESPN he has been working with a “slow drip” process as he learned the playbook.

Now, he’ll be the starting quarterback for at least the rest of Atlanta’s regular season. Mariota has been through this before. In 2019, the Tennessee Titans benched him in favor of Ryan Tannehill. Mariota has talked about that experience often — what he learned from it and how he handled it.

He signed with Atlanta in March on the same day the Falcons traded Matt Ryan to the Indianapolis Colts. The deal reunited Mariota with Smith, who had been the offensive coordinator for his final season with the Titans.

At the start of the season, it looked like the reunion could work. Mariota managed the offense well and had one of the best games of his career in Week 6, completing 92.9% of his passes for 129 yards and two touchdowns while rushing six times for 50 yards and a touchdown in a 28-14 victory over the San Francisco 49ers, which earned him NFC Offensive Player of the Week honors.

Mariota offered the Falcons’ offense an added dimension with his ability to run — he has rushed a career-high 85 times for 438 yards and four touchdowns — in their run-heavy offensive scheme.

Over the past month, though, Mariota’s performances declined as Atlanta gave him more passing attempts. During their 1-4 stretch, Mariota never completed more than 65% of his passes in a game and twice completed under 55%. He also never threw for more than 186 yards, despite having at least 20 attempts in each contest, while throwing five touchdowns and three interceptions.

This season, Mariota is 184-of-300 for 2,219 yards, 15 touchdowns and 9 interceptions. According to ESPN Stats & Information research, Mariota has been off-target on 20.5% of his throws this season, tied with since-benched New York Jets quarterback Zach Wilson for third worst in the NFL. The league average is 15.2%. Receivers have dropped only 2% of his throws.