Ezekiel Elliott hopes to play vs. Bears despite knee injury 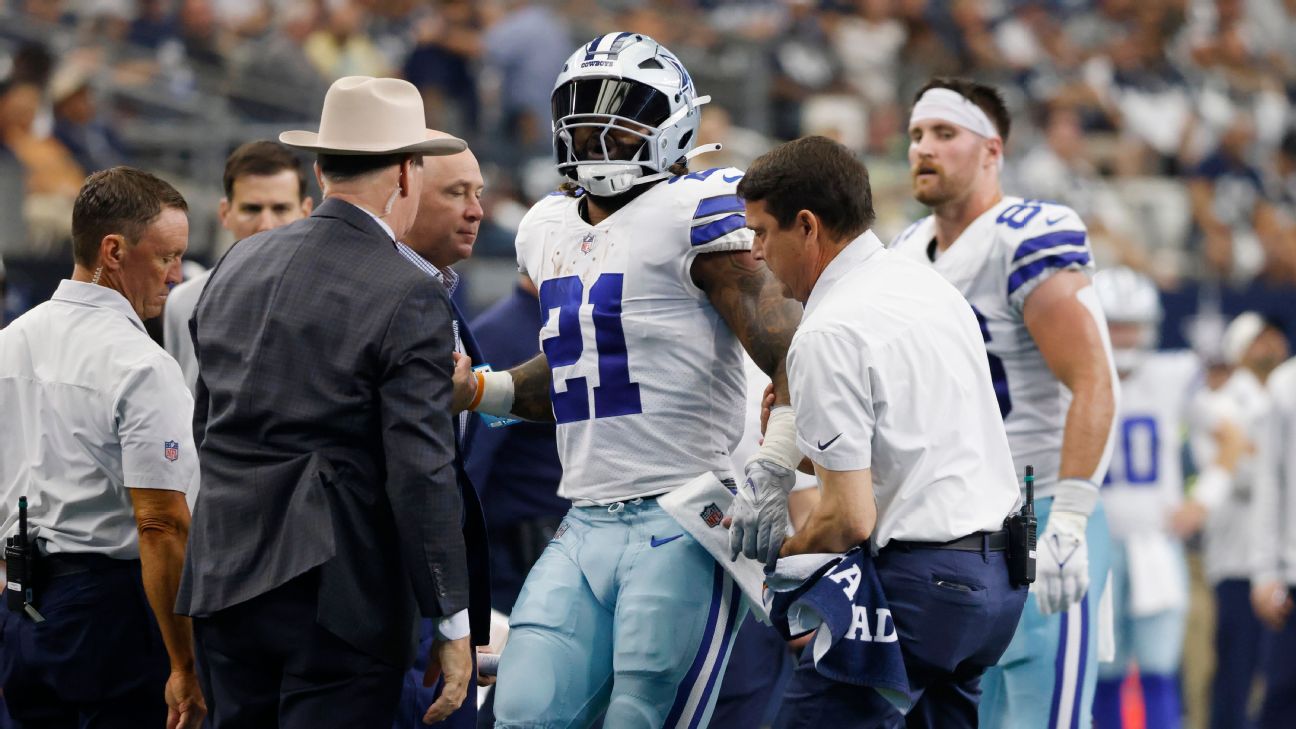 FRISCO, Texas — Ezekiel Elliott was not ready to rule himself out of Sunday’s game against the Chicago Bears, but the Dallas Cowboys running back’s availability is in question after he missed Wednesday’s practice with a right knee injury.

“We’ve still got a lot of time before Sunday,” Elliott said. “Right now I’m focused on getting this knee as healthy as I can.”

A source told ESPN that Elliott is dealing with a hyperextended right knee that has caused swelling and bruising after he took a hit in the second quarter of last week’s victory over the Detroit Lions. Elliott returned to the game and scored two touchdowns while finishing with 57 rushing yards on 15 carries, but was limping noticeably in the locker room after the game.

Elliott, who has 109 carries for 443 yards and four touchdowns this season, played most of last season with a partially torn posterior cruciate ligament in his right knee that he said took away his burst. He wore a knee brace late in the season but did not miss a game.

Elliott said he could play against the Bears without practicing during the week, telling reporters he has “got enough reps.” The Cowboys have a bye after playing the Bears, however, and a two-week break for Elliott could serve him well for the long haul.

“I think it’s a consideration,” Elliott said. “It just all depends on how I feel by the end of the week going into the game.”

If Elliott, who has missed just one game due to injury in his career, cannot play against Chicago, the Cowboys would lean on Tony Pollard, who has rushed for 375 yards and two touchdowns on 67 carries. He has never had more than 14 carries in a game in his career.

“In this league the only thing that is guaranteed is injuries,” Pollard said. “It’s 100% injury in this league. It’s expected, so the next guy gotta be ready to step in.”

Cowboys head coach Mike McCarthy said the team is “so, so fortunate” to have both Elliott and Pollard and noted that “both are fully capable of carrying a full load.”

The Cowboys are scheduled to have a full-padded practice Thursday and go through their final practice Saturday before needing to make a decision on Elliott.

Ezekiel Elliott hopes to play vs. Bears despite knee injury