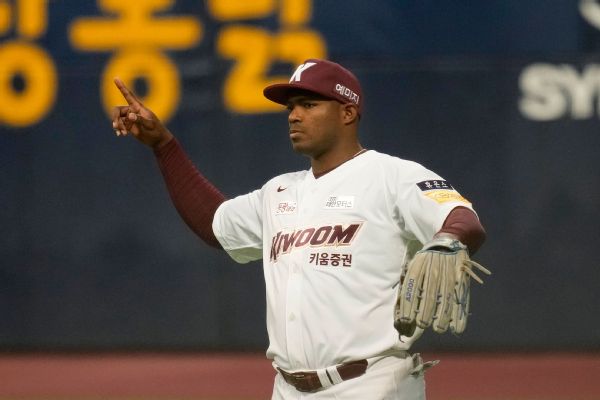 Former Major League Baseball player Yasiel Puig has agreed to plead guilty to a federal charge for lying to law enforcement officials about sports bets he made with an illegal gambling operator, according to documents unsealed Monday by the Department of Justice.

Puig, who now plays professionally in South Korea, will plead guilty to one count of making false statements, a crime that carries a maximum sentence of five years in federal prison. He also agreed to pay a fine of at least $55,000.

Puig will make his initial appearance in U.S. District Court on Tuesday.

According to his plea agreement filed on Aug. 29, Puig — who played for the Los Angeles Dodgers, Cincinnati Reds and Cleveland during a seven-year MLB career from 2013 to 2019 — began placing bets on sporting events in May 2019 through a third party who worked for an illegal gambling operation run by Wayne Nix, a former minor league baseball player.

The DOJ release did not reference any bets that were made on baseball. Puig played for Cincinnati and Cleveland in 2019 before becoming a free agent. He then played in the Mexican League and last year signed a one-year, $1 million contact with South Korea’s Kiwoom Heroes.

In January, federal investigators interviewed Puig in the presence of his lawyer. In his plea agreement, Puig acknowledged lying to those federal agents who were looking into the business, denying he had placed bets through the operation.

“When given the opportunity to be truthful about his involvement with Nix’s gambling businesses, Mr. Puig chose not to,” IRS Criminal Investigation Los Angeles Field Office Special Agent in Charge Tyler Hatcher said in the release. “Mr. Puig’s lies hindered the legal and procedural tasks of the investigators and prosecutors.”

Nix pleaded guilty in April to conspiracy to operate an illegal sports gambling business and filing a false tax return. Prosecutors said Nix’s operation ran for two decades and included both current and former professional athletes as clients or employees.

Federal prosecutors also announced Monday that another former MLB player, Erik Kristian Hiljus, 49, of Los Angeles, had agreed to plead guilty to two counts of subscribing to false tax returns. They said he was an agent for Nix’s operation.

Hiljus could face up to six years in federal prison at sentencing.

Puig batted .277 with 132 home runs and 415 RBIs across his seven major league seasons, the first six with the Dodgers where he earned an All-Star selection in 2014.

Information from The Associated Press and Reuters was included in this report.