Does anyone want to be the light heavyweight champ?

The UFC light heavyweight division has been home to some of the biggest stars and best fighters in promotion history. The Liddell vs. Ortiz and Couture vs. Liddell series of fights helped build the UFC into the juggernaut it is today. The Jones-Cormier rivalry is arguably the greatest in MMA history. Jones himself was the anchor of 205 pounds for nearly a decade.

Light heavyweight was once the UFC’s glamour division, where every title fight was a spectacle that crossed over into the mainstream and future Hall of Famers dotted the rankings. Ever since Jones relinquished the title more than two years ago, though, things have been a bit of a mess. The latest example being the UFC 282 main event between Jan Blachowicz and Magomed Ankalaev for the vacant belt going to a split draw. The year 2022 will end without anyone holding the UFC light heavyweight belt.

Jones gave up the title in August 2020, as he prepared for a move to heavyweight (which, by the way, still has not happened in earnest). Blachowicz then knocked out Dominick Reyes to become champion. Reyes was the young stud who nearly beat Jones — many had him winning the decision — and seemed like the heir apparent. Instead, Blachowicz blasted him and went on to defend successfully against then-middleweight champ Israel Adesanya, one of the biggest stars in the UFC. Glover Teixeira, then 42 years old, stunned Blachowicz in October 2021 to become the second-oldest champion in promotion history. 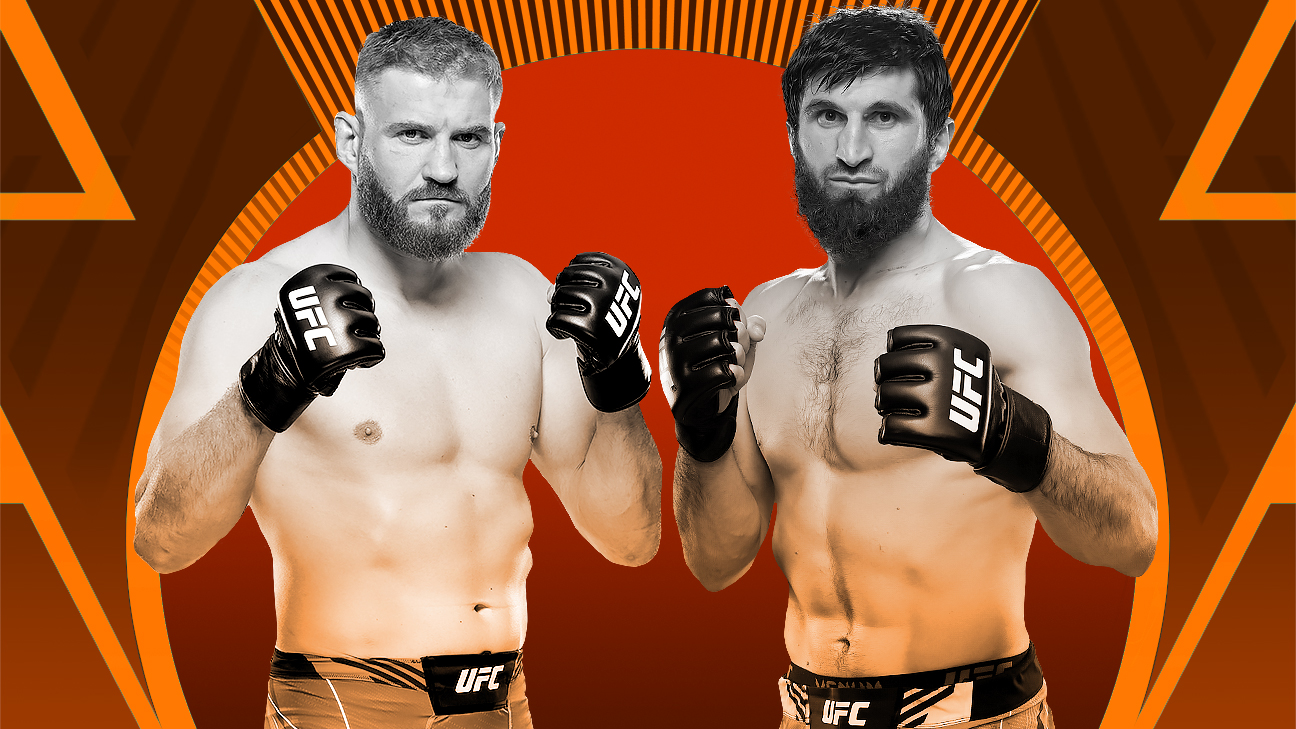 If the pay-per-view is purchased, all fights from UFC 282: Blachowicz vs. Ankalaev will be available to watch on ESPN+.

The divisional title picture seemed to be righted earlier this year. Teixeira and Jiří Procházka had an all-time great, bloody war which Procházka managed to finish late in the fifth round to win the belt. Procházka, an eccentric action fighter hailing from the Czech Republic who presents himself like a modern-day samurai, seemed like the kind of champion the UFC could get behind. Then, disaster struck again just two weeks ago.

Procházka suffered a bad shoulder injury, one that would keep him out an extended period, before a planned Teixeira rematch, which was to headline UFC 282. Procházka relinquished the belt due to his likely long layoff and recovery. The UFC offered Teixeira a bout with Ankalaev for the vacant title, but Teixeira said he’d rather have more time to face him. Ankalaev was supposed to take on Blachowicz in the co-main event of UFC 282. So, with Teixeira declining that offer, the UFC bumped Blachowicz vs. Ankalaev to the main event of the pay-per-view card and put the title on the line.

Got all that? Well, there’s a bit more. Blachowicz and Ankalaev had a hard-fought battle with Blachowicz doing major damage to Ankalaev’s legs early on with kicks and Ankalaev rallying late with his hands and his wrestling. Ankalaev’s 10-8 round in the fifth ended up resulting in a split draw.

No winner. No champion. Again.

The past two-plus years have been bizarre for the top of the light heavyweight division. And its longtime champion Jones hasn’t fought since February 2020 when he last defended the 205-pound gold. Maybe “Bones” and that belt were just made for each other. — Raimondi

Ilia Topuria is a five-tool star on the rise

Wagenheim: Ilia Topuria took a big step toward becoming a leading man in the men’s featherweight division by showing he can do it all. He can strike with his fists and his legs. He can grapple. And no less important, he can pick a fight and engage the fans’ interest.

Topuria made a statement by ending Saturday’s battle of unbeatens by choking out Mitchell, a grappling savant, then repeated that statement verbally, proclaiming, “I knew I was better than him on the ground and in stand-up — anywhere.” If you just watched the finish, you might agree without hesitation. But it should be noted that by the time Mitchell tapped out, he was a shell of himself, after being battered by punches for the entirety of the fight.

Still, Topuria was the one who emerged from this crossroads meeting with his path leading upward. And it was not entirely because of his performance inside the cage. During fight week, he drew attention to himself by repeatedly engaging with Pimblett, arguably the biggest star at UFC 282. Had Topuria not followed up by coming through on fight night, all the trash talk with “The Baddy” would have been for naught. But Topuria did come through, and at 13-0, he now is on his way.

It’s early, but UFC has something in Rosas

Raul Rosas Jr. wins his UFC debut over Jay Perrin with a submission via rear-naked choke.

Raimondi: Forget the fight. Forget the finish. Go back and listen to the reaction Raul Rosas Jr. got when he entered T-Mobile Arena on Saturday for his UFC debut. Coming off Dana White’s Contender Series, the potential of the now-18-year-old fighter was clear. He was only 17 on the show and fought like a 10-year veteran. His grappling is off the charts and he used his wrestling well at UFC 282. Undoubtedly, he’s one of the best prospects in the world. His upside is unlimited.

But no one realized during Contender Series, which takes place mainly without fans at the UFC Apex, that Rosas, a Las Vegas resident, is a burgeoning star. T-Mobile Arena erupted during his entrance. Rosas was born in the United States but represents Mexico, his parents’ home country. Mexican fans were waving all over the building. And when Rosas choked out Jay Perrin, the crowd went crazy again. The UFC has a possible box-office draw in the United States and Mexico, which is somewhat unexpected.

As for Rosas, he gets it. In his postfight interview with Joe Rogan, Rosas said he wanted the $50,000 Performance of the Night bonus so that he could buy his mother a minivan and she could give him a lift to the UFC Performance Institute. The kid was savvy enough and humble enough to have a little fun with his age. Cormier said it best on commentary. You can’t ask for a better UFC debut, from the entrance to the fight to the finish to the postfight interview.

What’s next for top prospects after UFC 282

Paddy Pimblett and Jared Gordon give the Vegas fans their money’s worth in Round 1 of their co-main bout.

Who should be next: Christos Giagos

Pimblett got the job done, which is the most important thing — but there is no way anyone can watch this performance and say he’s ready for a big step up in competition. It may have been in defeat, but Gordon gave Pimblett a lot to think about coming out of this one.

Looking at Giagos, it might look like I’m trying to throw Pimblett a sure win, but look closer. Yes, Giagos is coming off back-to-back losses, but they were to great opponents in Arman Tsarukyan and Thiago Moises. He’s been in the UFC for nearly five years. He’ll give Pimblett a fight, but a winnable fight — and if you’re the UFC, that’s what you want. This isn’t boxing and it’s not about setting Pimblett up with a sure thing, but it is about continuing to build a guy the right way and put him in positions to succeed. Eventually, the time is going to come for a big step up in competition, but it’s not right now.

How about it? Guida is such an established name, he’s a pioneer. He demands all the respect in the world. He’s a ball of energy and he could handle himself in a fight buildup with Pimblett. You’re telling me this wouldn’t be a great, high-energy fight for the U.K. fans in March? This might actually be the one, the more you think about it.

Who should be next: Giga Chikadze

Oh yes. What a fight. Honestly, there are many good fights out there for Topuria. This division is terrific. But Topuria is the real deal, there is no doubt about it. There are a lot of real deals at 145 pounds. I can’t crown him a future featherweight champ just yet, but wow. What a performance by Topuria, and it just extends what he’s already been doing in the UFC. His style is entertaining and it’s difficult to deal with. It’s clean. He’s tactful and he’s ultra-capable of hurting you. A fight against Chikadze could easily be a main event at UFC Fight Night. Chikadze is still a threat at this weight, despite a significant setback in his past outing against Calvin Kattar. This fight would be fire.

Yusuff was actually ranked behind Mitchell going into this weekend, but that shouldn’t be a problem. Obviously, Topuria will want as highly ranked of an opponent as he can get, but Yusuff is right there around the top 10 and he’s an established commodity at this weight. Stylistically, this is another fire matchup. Competitive. Speed and technique vs. speed and technique. Have I mentioned how much I love the featherweight division?

Who should be next: The bottom of the UFC’s roster

That debut left me a little speechless. I know Rosas Jr. has skills and he’s a great prospect, but you are NOT supposed to walk into T-Mobile Arena with that confidence level, then throw around an eight-year veteran at 18 years old. That does not happen, guys. Incredible.

Now, what’s next for Rosas Jr.? Whoever is on the chopping block in the UFC’s 135-pound division. As insane as that debut was, Rosas Jr. still needs time. Maybe he is so much the real deal that he will win a championship within the next three years and become the next Jon Jones. But you can’t say that after one fight. Don’t expect the UFC to book him against anyone too crazy too fast, which is 100,000% the right way to do it. Let this kid develop, because he’s got something special. In the same way, you’d let a high school kid who throws 100 mph develop into an MLB starter. Build him. Let him fight frequently. He wants that and he just steamrolled his first opponent. March in Vegas, let’s see him again.

Who should be next: Derek Brunson

It’s pronounced Du Ple-See! Learn the name and don’t forget. A breakout performance by Du Plessis, despite that dicey second against Darren Till. The South African has shown potential since signing with the UFC two years ago, and it’s time to see exactly how he fits in this division. Brunson was supposed to face Jack Hermansson last week in Orlando, but had to withdraw with an arm injury. However, his recovery time frame is not long, and this fight makes sense. According to ESPN’s rankings, Brunson is ranked No. 7 in the division, but is coming off a loss and needs to defend that rank. Du Plessis is perfect in the Octagon thus far and deserving of a step up. This would be a big test for him and a chance for Brunson to recapture some fire against a surging contender.

Whoever wins next week’s main event, it makes sense to pair with Du Plessis, because there will likely be an immediate rematch at the top between champion Alex Pereira and Israel Adesanya. Robert Whittaker is up there as well, but he has a fight in Perth and he’s already beaten Cannonier. So, for the sake of fresh matchups, timing and rankings, it would make sense to pair Du Plessis with the winner of next week’s fight.

Does anyone want to be the light heavyweight champ?