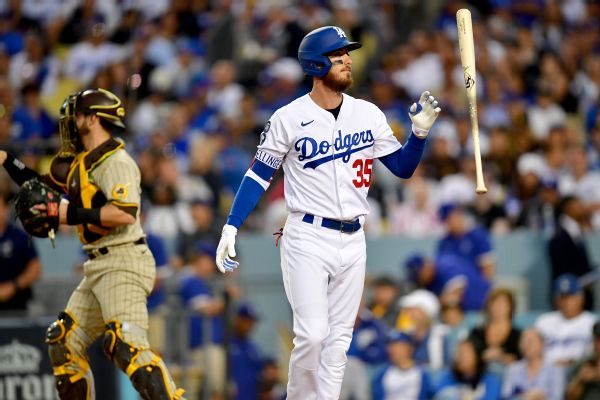 Cody Bellinger, a 27-year-old outfielder who was an MVP as recently as 2019, is expected to be non-tendered by the Los Angeles Dodgers, a somewhat expected move that nonetheless encapsulates his precipitous downfall offensively, a source told ESPN on Friday, confirming a report by The Athletic.

Bellinger was due to make something in the neighborhood of $18 million in 2023, which would have been his final season before free agency. Instead, he’ll venture into the free agent market a year early — though the Dodgers could always renegotiate a different contract, perhaps one that covers multiple years at a lower rate.

Regardless, a Dodgers team coming off back-to-back 100-plus-win seasons is in sudden need of a center fielder. Bellinger continued to provide Gold Glove-caliber defense at that position, in addition to plus speed on the bases, but his struggles offensively became too much to stomach at his current rate. Teams faced a Friday deadline to decide whether to tender a 2023 contract to their arbitration-eligible players.

On the heels of an MVP and coming off the COVID-19-shortened spring training, Bellinger rejoined the Dodgers in the summer of 2020 with an overhauled batting stance that he struggled with throughout the shortened season. He then suffered a shoulder injury during a home run celebration in the National League Championship Series that necessitated offseason surgery.

Recovering from that injury was seen as part of the reason for his struggles in 2021, when his batting average plummeted to .165. He switched to a more basic approach down the stretch — lowering his hands, choking up on the bat — and produced in the postseason, inspiring hope heading into 2022. But Bellinger struggled once more, batting .210 with 19 home runs in 144 games for a Dodgers team that set a franchise record with 111 victories. A telling sign came in the ensuing playoffs, right before the team was eliminated by the San Diego Padres in the division series, when Bellinger sat on the bench with an opposing right-hander on the mound in Game 4.

It might have been his final image in a Dodgers uniform.