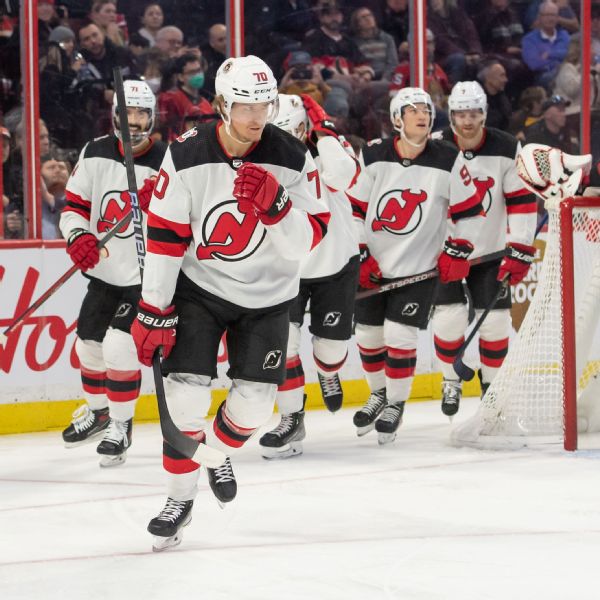 OTTAWA, Ontario — Akira Schmid made 25 saves and the New Jersey Devils beat the Ottawa Senators 5-1 on Saturday for their 12th straight victory.

Derick Brassard scored for the Senators. Anton Forsberg started the game but was pulled early in the second period after allowing the third goal on 18 shots. Cam Talbot finished the game allowing one goal on 17 shots.

Haula opened the scoring with a power-play goal early in the first period for his first of the season. Bastian made it 2-0 late in the first, jumping on a rebound out front.

The Devils didn’t let up, making it 3-0 early in the second when Boqvist was able to grab a puck out front, putting an end to Forsberg’s afternoon.

Brassard got the Senators on the board late in the period, but the Devils came right back, scoring a shorthanded goal with 34 seconds remaining in the period.

Ottawa pulled the goalie with 4:51 remaining in the third, but the Devils made them pay for it with McLeod scoring an empty-net goal.

Game notes
Ottawa D Artem Zub returned to the lineup after missing the last eight games with an upper-body injury. … The Devils are a perfect 7-0-0 against Canadian opponents this season. Saturday’s matchup is the second of three against the Senators. … Devils captain Nico Hischier has 12 points (6 goals, 6 assists) over his last 10 games.

Senators: At the San Jose Sharks on Monday.