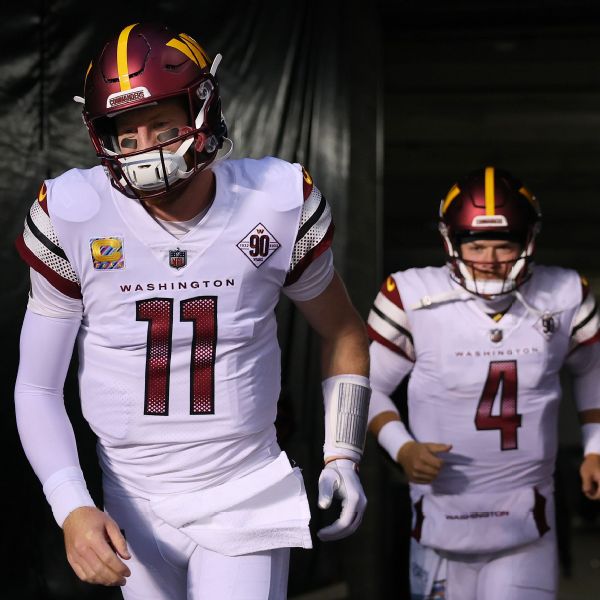 The Washington Commanders have a decision to make at quarterback, but coach Ron Rivera still isn’t sure when it must be made.

Rivera said he’s still not sure if Carson Wentz will be activated off injured reserve this week after missing the last four games with a fractured right ring finger. It was originally thought that the injury would sideline him for four weeks. If that’s the case, then Wentz could be activated this week.

However, even if he is available there’s a good chance Washington sticks with his replacement, Taylor Heinicke. Though he lacks Wentz’s size or arm, the Commanders have gone 3-1 with Heinicke starting and sprung a big upset at Philadelphia Eagles on Monday night.

Rivera said he still has to meet with trainers to discuss Wentz’s situation and then discuss the situation with offensive coordinator Scott Turner and quarterbacks coach Ken Zampese.

Then, when Rivera decides on a starter, he would first meet with the players involved and then inform the team. That would not happen until Wednesday morning at the earliest.

“You have to look at the momentum and what the mood of the team is,” Rivera said. “There are a lot of factors.”

Washington acquired Wentz, the second overall pick in the 2016 draft, from the Indianapolis Colts in the offseason. The teams swapped second-round draft picks last April and the Commanders also sent a third-round choice in 2022 and a conditional third in 2023. The latter turns into a second-round pick if Wentz plays 70% of the snaps this season.

Wentz, who started the first six games, fractured his right ring finger in a 12-7 win over the Chicago Bears on Oct. 13 and was placed on injured reserve.

While the offense remained inconsistent, he did lead a late drive to clinch a win vs. Green Bay Packers and also a last-second march to win at Indianapolis in addition to Monday night’s upset.

Heinicke has posted a 47.2 quarterback rating in his four starts compared to Wentz’s 32.4 in six starts. Wentz also had to learn a new offense, having played in a different system his previous six seasons. It led to him holding the ball longer than usual at times behind shaky pass protection. He was sacked 23 times.

“You look at what is best for the team and that’s how it has to be,” Rivera said. “There’s a great saying, ‘You treat everyone the same, you treat everyone fair but you treat everyone according to the team. So the decision will be made about the team first and foremost. Whoever the starter is I will commit to them fully. I don’t want them looking over their shoulder.”

But Rivera stopped short of saying any decision would be for the remainder of the season.

After Monday’s win, Heinicke said he’s not worried about any decision.

“I said it back in OTAs that we brought Carson in to be a starter. If my number is called, I’ll be ready to go in,” Heinicke said. “Whatever decision they want to make, let’s go. If I’m backing up Carson next week, great. The biggest thing for me is let’s just go win. Let’s keep winning whether it means playing or not.”

Heinicke does have the support of the locker room. They’ve gravitated to his underdog story — the former undrafted quarterback who was sleeping on his sister’s couch at this time two years ago before Washington signed him in December 2020. He started a playoff game that season against Tampa Bay Buccaneers and played well in a 31-23 loss.

“He’s been great for us since he’s got here, honestly,” receiver Terry McLaurin said. “He plays with no fear, everything’s not pretty. He is going to extend plays with his legs and get the tough yards. He is going to get us in the right situations. You just feel confident with a guy back there like that. A lot of people want to measure his height, his arm, all those things. You can’t measure what’s inside of his chest.”