Commanders activate Carson Wentz to back up Taylor Heinicke 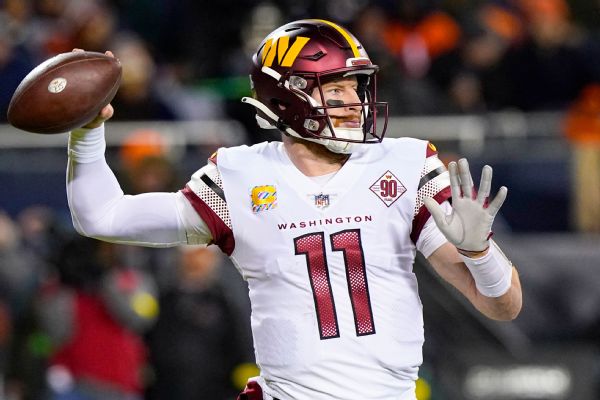 The Washington Commanders activated quarterback Carson Wentz from injured reserve, but he won’t return to the starting lineup.

Washington coach Ron Rivera said last week that when Wentz returned, he would be Taylor Heinicke‘s primary backup when the Commanders (7-5-1) host the New York Giants (7-5-1) on Sunday night.

Washington had until Wednesday to either activate Wentz or leave him on injured reserve.

The move comes on the same day that Washington placed center Tyler Larsen on IR. Larsen tore the meniscus in his right knee in the Dec. 4 tie vs. the Giants and will miss the rest of the season.

Wentz hasn’t played since breaking his right ring finger in the Oct. 13 win over the Chicago Bears. During his absence, the Commanders have gone 5-1-1 under Heinicke.

Though his quarterback rating of 42.5 ranks 26th, Heinicke has won over teammates with late-game drives that led to scores or used a lot of time to clinch a win. Teammates have praised his leadership and penchant for clutch plays.

Wentz returned to practice Nov. 23 but was not yet ready to be active in a game. Then, before the Giants’ game, Wentz missed multiple practices because of an illness sweeping the facility.

Washington traded two draft picks and swapped 2022 second-round picks with Indianapolis to acquire Wentz in the offseason. One of the picks was a conditional third-round selection in 2023, based on playing time. Wentz’s injury will allow Washington to keep its second-round pick in April. He would need to play 70% of the snaps this season for the Colts to receive the higher pick. But even if Wentz started the last four games, he would fall short of that figure.

Larsen’s injury was a severe blow to the offensive line, which had started to rely more on power runs between the tackles. His muscle inside helped that strategy. He was the primary backup to starter Chase Roullier, who is out for the season with a torn right MCL.

Washington has multiple center options on its roster, including Wes Schweitzer, who has played most of his career at guard but replaced Roullier at center in Week 3. In his lone start, Schweitzer suffered a concussion and didn’t return to practice until Dec. 1. Washington likes his run blocking.

The Commanders also have veteran Nick Martin, who has started 64 games at center including two with Washington this season. Wes Martin, on the practice squad, also can play center.

Commanders activate Carson Wentz to back up Taylor Heinicke