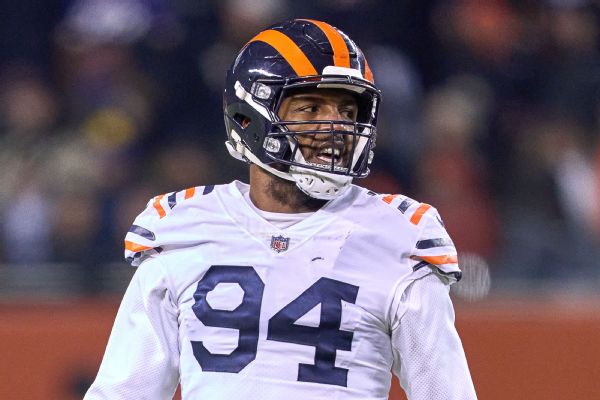 Both teams announced the terms of the trade Wednesday afternoon, pending Quinn passing a physical.

Quinn had been with the Bears since April 2020 when he signed a five-year, $70 million deal as a free agent. A league source confirmed with ESPN that the Bears are absorbing the bulk of Quinn’s 2022 salary.

“Obviously, part of the tough thing with this job and the position are the tough decisions you have to make,” Bears general manager Ryan Poles said. “I almost feel like there’s the emotional side, the human part of it that you know you’re affecting not only a man but his family. You’re kind of shaking that all up, and I don’t take that lightly at all and I’m sensitive to that. You also know that you’re tweaking the fibers of your locker room, and that’s a big deal, too.

“And on the business side, it just made too much sense for what we’re trying to do. It’s going to allow us to continue to build a highly competitive roster.”

This is the third time Quinn has been traded over his 12-year NFL career and the second time to a team in the NFC East. Quinn was sent from the Rams to the Miami Dolphins in 2018 and then to the Dallas Cowboys one year later.

Quinn was the subject of trade rumors throughout the offseason after Chicago hired a new front office and coaching staff that parted ways with more than 20 players from the Bears’ previous regime. That included trading fellow pass-rusher Khalil Mack to the Los Angeles Chargers in March in exchange for a 2022 second-round pick and 2023 sixth-round selection.

Quinn, a three-time Pro Bowl defensive end, broke the Bears’ single-season sack record with 18.5 in 2021. Though his statistics have leveled off this season, he is regarded as one of the top pass-rushers in the NFL. In seven games this season, he has one sack, three quarterback hits, two tackles for loss and eight total tackles.

Bears linebacker Roquan Smith became emotional during his Wednesday news conference when asked about reports of the trade.

“Let me take a second for a second, if you don’t mind,” Smith said while wiping away tears. “You know, I have a great deal of respect for that guy. Damn. Crazy.”

Quinn, who was the recipient of the Bears’ Jeff Dickerson Media Good Guy Award in 2021, is a well-respected member of the locker room and team captain. Poles reflected on the emotional part of executing this trade multiple times Wednesday.

“And that’s when I talk about the emotional part, that definitely is,” Poles said. “I value — I think I’ve talked about that a lot — the locker room and what it means and the culture, and it sucks to mess with that, to be completely honest with you. But again, my job is to do what’s best for this organization not only now but in the future. I felt like that was the best move for us to make.”

On the Eagles’ side, they haven’t been lacking in pass-rush production — they’ve posted 17 sacks and 39 quarterback hits in six games — but they wanted to add depth at a key position, especially after losing defensive end Derek Barnett for the season with an ACL tear in the opener against the Detroit Lions.

Quinn joins a group that includes Josh Sweat, Brandon Graham and Tarron Jackson, who have combined for 5.5 sacks on the year.

“I think it’s another great player on this team. He has a history of being a great defensive end and edge rusher, and I think he’ll help us out in a number of ways,” said Eagles quarterback Jalen Hurts. “Adds a lot of depth, and I’m excited to meet him [Thursday] when he comes.”

Quinn reported to training camp on time after skipping out on the Bears’ entire offseason program, including mandatory minicamp in June. He said then that he never expected to go anywhere while also noting the uncertainty of a decision that is not up to him.

“I’ve been traded twice,” Quinn said in July. “You get tired of moving. I thought I did a good job last year, but I guess I’ll just continue to try to reprove myself. … I expect to be here, but I guess if not, well, that’s out of my control. I’m just going to take it day by day and have fun here with the guys and just let life take its course.”

Quinn has been on the field for 67.86% of defensive snaps, which leads all of Chicago’s defensive linemen. The Bears used a fifth-round pick on Dominique Robinson in May, who figures to take on a bigger role behind fellow edge rushers Al-Quadin Muhammad and Trevis Gipson.

Poles said during the offseason that he did not plan to trade Quinn. What changed his mind is the way other Bears pass-rushers have performed this season.

“I really do trust in Gipson. He’s had a good start to the season,” Poles said. “Muhammad, he’s brought intensity and toughness to that group. And even young Dom Robinson has flashed — he tipped that ball that Roquan got the other day and has a promising future, and I think he’s going to continue to trend upwards.”

Quinn, 32, was the oldest defensive player on Chicago’s roster and was not expected to be part of the team’s long-term plans. He carries an $18.237 million cap hit for 2023 and has approximately $7.9 million remaining of his $12.8 million base salary for 2022.