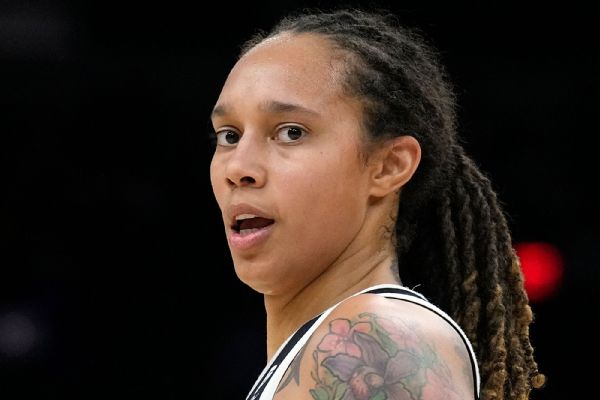 Brittney Griner pulled on a pair of black Chuck Taylor sneakers, Phoenix Suns shorts and a T-shirt touting Title IX, and picked up a basketball Sunday for the first time in almost 10 months, her agent told ESPN.

Her first act was a dunk.

Griner is still at Fort Sam Houston in San Antonio — where she was taken after her release from a Russian prison last week — with no immediate plans to leave, Lindsay Kagawa Colas said. And despite the light workout, she said, the 32-year-old Griner isn’t ready to say when or if she plans to return to her WNBA career with the Phoenix Mercury.

“If she wants to play, it will be for her to share. She has the holidays to rest and decide what’s next without any pressure,” Colas said. “She’s doing really, really well. She seems to have endured this in pretty incredible ways.”

Griner has not spoken publicly since her return but should issue a statement “this week,” Colas said.

Griner and her wife, Cherelle, have been staying in a hotel on the base, reuniting with family members and deciding what to do with her freedom. Her father, Ray, and some family members visited her Saturday along with a sizable meal from Smoke Shack barbecue in San Antonio. More barbecue is expected in the coming days.

Griner got a haircut Sunday morning from the San Antonio Spurs‘ barber, Colas said, cleaning up the dramatic cut she elected to have two weeks ago; Griner’s attorney told ESPN last week that the player’s famously long hair kept freezing in the cold of the Russian penal colony. It was a simple decision, but one that was taken as a promising sign that she felt a sense of agency during her confinement.

“She thought she was going to be there a while,” Colas said.

While Griner was in the Moscow jail where she spent most of her time, she declined her lawyers’ offer to bring her a basketball, saying she wasn’t ready to think about the game. But Colas said she wasn’t sure whether Sunday’s workout was a step toward a return to Griner’s career.

Several sources close to Griner have said that when she does leave, she will not head to her Phoenix home but to what they describe only as a private, secure location.

“There’s no timeline on her return at this point. She’s reintegrating into a world that has changed for her now,” Colas said. “From a pure security standpoint she’s not going to be able to move in the world the way she did. It’s not a fate that she asked for, but I think she’s going to try to utilize her fame for good.”

Colas said Griner will work to raise attention for other Americans who are considered to be wrongfully detained in other countries, particularly Paul Whelan, the former U.S. marine who has been in a Russian prison for four years on espionage charges.

Griner has been upbeat and engaging with everyone she meets, several sources said, eager to converse after 10 months in Russian captivity with few English speakers to engage with.

Roger Carstens, the U.S. special presidential envoy for hostage affairs, told CNN on Sunday morning that Griner was animated and talkative for about 12 of the 18 hours they spent flying from Abu Dhabi, where Griner was exchanged Thursday for convicted Russian arms dealer Viktor Bout.

As Cherelle Griner, Colas and U.S. officials awaited the flight in a large airplane hangar, they began to look for a spot where Cherelle could wait for Brittney without their reunion being seen by news cameras outside the base.

Someone noticed a black “X” taped to a perfect spot on the floor, and Cherelle stood there as she waited. After the plane carrying Brittney landed and taxied to a rest, a medical team and a psychologist boarded, spent about five minutes with her, and then Griner exited the plane, walked into the hangar and embraced her wife for the first time in almost 10 months, Colas said. Military and government personnel stood about 20 yards away as the women shared an extended embrace. The two then adjourned to a “family room” that was pre-stocked with some of Griner’s favorite snacks: Reese’s peanut butter cups, Cheetos and Dr. Pepper.

Griner left the hangar and went to a hospital on the base, where she got a thorough medical and mental health evaluation. She also got a new pair of glasses; her previous pair broke in Russia about a week ago.

Colas said Nike sent Griner a wardrobe to wear, as all Griner had with her were the few clothes and effects she had in Russia. One item she brought along was a picture of a dinosaur sent to her in Russia by Colas’ 6-year-old son, Drew. Under the dinosaur, Colas said, Drew had written “Say nothing.”

“I think he heard me on the phone too many times,” she said.