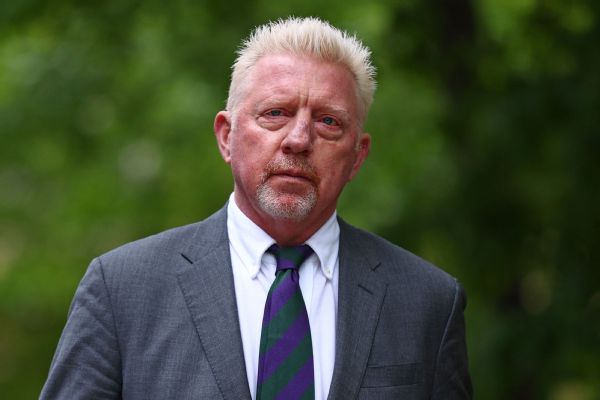 “It was the loneliest moment I’ve ever had in life,” Becker said in an interview with German broadcaster SAT.1 that aired Tuesday, recalling how hours earlier he had been unable to say farewell to his loved ones before being led downstairs to the courtroom jail.

The three-time Wimbledon champion ​​was sentenced to 30 months in prison in April for illicitly transferring large amounts of money and hiding assets after he was declared bankrupt. Becker would normally have had to serve half of his sentence before being eligible for release, but was released early under a fast-track deportation program for foreign nationals.

Becker, who was deported to his native Germany on Dec. 15, said he prayed daily in the three weeks between his conviction and sentencing, conscious that there was a chance he might not get away with a suspended sentence.

Arriving in Wandsworth, the 55-year-old Becker said he feared attacks by other inmates.

“The many films I saw beforehand didn’t help,” he said.

Becker said prison authorities appeared to have tried to ensure his safety, allocating him a single cell and getting three experienced inmates — or “listeners” — to guide him in his new life behind bars.

That included coping with the lack of food, Becker said, as prison fare was largely restricted to rice, potatoes and sauce. “Sunday roasts” consisted of a chicken drumstick, he said.

“I felt hunger for the first time in my life,” said Becker, who won the first of many millions of dollars as a player at the age of 17.

Violence was a problem, he said, recounting instances at Wandsworth and later at HMP Huntercombe where inmates threatened to harm him until others stepped in.

“I’ve never experienced such solidarity in the free world,” he said, adding that he planned to stay in touch with some of the people he’d met in prison.

For Becker, who rose to stardom in 1985 at age 17 when he became the first unseeded player to win the men’s singles title at Wimbledon, the prison sentence was a heavy blow.

Asked about the judge’s statement that Becker had shown “no humility,” he acknowledged in the interview that “maybe I should have (been) even more clear, more emotional.”

“Of course I was guilty,” he said of the four out of 29 counts he was convicted on.

Still, Becker said he “it could have been much worse.”

After retiring from professional tennis in 1999, the six-time Grand Slam champion worked as a coach and television pundit while also engaging in a wide range of investments and celebrity poker games.

Now he hopes to turn a new page and avoid the mistakes he made in the past — many of which he blamed on laziness and bad financial advice received from others.

“For years I made mistakes, I had false friends,” he said. “I think this time in prison brought me back.”

Becker’s time outside the limelight likely won’t last long. Organizers of the annual Berlinale said Tuesday that next year’s film festival will feature the premiere of an as-yet untitled documentary about Becker by Oscar-winning director Alex Gibney.