Bill Belichick not ready to commit to Pats QB 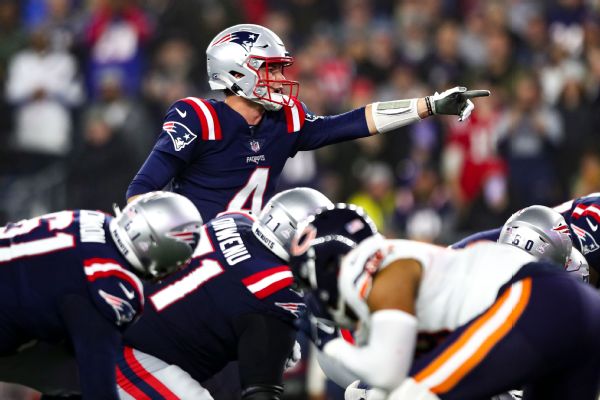 FOXBOROUGH, Mass. — New England Patriots coach Bill Belichick wasn’t ready to name a starting quarterback in the aftermath of a 33-14 blowout loss to the Chicago Bears on Monday night.

Belichick pulled starter Mac Jones after three series, inserting rookie Bailey Zappe in his place for the rest of the game and sparking the question of who will be starting when the team visits the New York Jets on Sunday.

Jones’ final play was an interception, but Belichick insisted he wasn’t benched and would have returned to the game in the second half if the score had been closer.

He said the team intended to play both Jones and Zappe — and informed both players of the plan leading into the game — with Jones’ recovery from a high left ankle sprain “a factor” in the decision. Jones was playing for the first time since Sept. 25.

The Patriots fell behind 10-0 in the first quarter, and Zappe’s insertion in the game created an immediate spark with back-to-back touchdown drives. But Zappe (14-of-22 for 185 yards, 1 TD, 2 INT) couldn’t carry the momentum into the second half.

As for what that means for Sunday’s game against the Jets (5-2), Jones is prepared for any scenario. It’s a critical game for the Patriots, who at 3-4 find themselves in last place in the AFC East.

Jones wouldn’t put a percentage on his health.

“I don’t really do the whole percentage thing. You are either able to play or not. In the NFL you don’t get any credit for playing hurt or not, and there’s no excuses,” he said. “So I felt like I was good to go. With time it will get better. I’ve just got to play better.”

Some Patriots players seemed surprised by the quarterback switch, and also hearing the home crowd chanting “Zappe! Zappe! Zappe!” as Jones struggled. Zappe had generated notable fan support after helping the team to victories the prior two weeks.

“That’s the NFL for you. It’s a fast-changing business,” leading receiver Jakobi Meyers said. “It’s tough, as a man, to see someone who works so hard get that kind of treatment.”

Jones said he knew that Zappe would play at some point Monday.

“I think Coach Belichick had a really good plan for us. I understood the plan and what was going to happen … and the timing is the timing. We were on the same page and there’s no hard feelings or anything,” he said.

“I wish I played a little bit better. Obviously the game wasn’t good by any of us and it starts with me.”

Zappe was asked when he learned that Jones would start on Monday.

“About the same time as you all did,” he answered, which seemed to be a reference to close to kickoff. “I prepare like I have every other week, like I was one play away. It’s the same thing I’m going to do this week.”

Bill Belichick not ready to commit to Pats QB