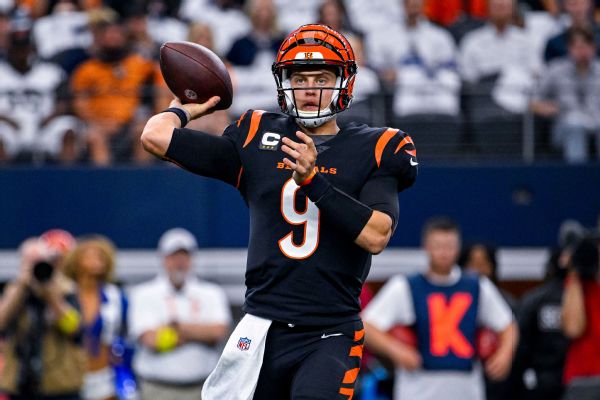 CINCINNATI – Cincinnati Bengals quarterback Joe Burrow offered some advice for those panicking about the team’s winless start heading into Week 3.

“Let’s all just take a deep breath and relax,” Burrow said Wednesday during his weekly news conference. “We’re gonna be fine. We’re not worried about it.”

Cincinnati’s reign as defending AFC champions has not gone well. The Bengals are the first team in the Super Bowl era to lose their first two games despite being at least a 7-point favorite in each contest, according to ESPN Stats & Information.

Staying calm despite the early losses was a primary talking point for Burrow and several of the Bengals ahead of this weekend’s game against the New York Jets, who will be starting back-up quarterback Joe Flacco.

“We’ve been begging for expectations,” Taylor said, who started his coaching tenure in Cincinnati with a 2-14 season in 2019. “We’ve been begging for high standards and now they’re here and this is part of it. When you start out slower than what you hoped and what people anticipated, then you’re gonna deal with that. And I love it.”

The Bengals are the lone team in the AFC North without a win after two weeks. The Pittsburgh Steelers, Cleveland Browns and Baltimore Ravens are all 1-1.

“Those guys are working hard to get it right,” Burrow said. “I can do a lot more to help them, too. And we can do more with play-calling to help them as well. We’re getting this thing right. Nobody’s panicking.”

Burrow said while there is no panic, there is an urgency to avoid an 0-3 start. Since the team’s loss to Dallas, Burrow has referenced the multiple two-game losing skids the Bengals suffered last season, including one that featured started with an upset loss to the Jets in Week 8.

The top overall pick in the 2020 draft said some of the same issues that have been discussed recently were also talked about last year before the Bengals corrected course, secured their first playoff berth since 2015 and won their first AFC championship since 1989. Burrow said how the team fared last year gives him confidence Cincinnati can do it again.

And when it comes to breathing easy and feeling good about things despite early struggles, Burrow isn’t alone.

“At the end of the day, we know that we have a good football team and that we’re gonna get back on track and we’ll be in good shape,” Taylor said. “And everyone can relax.”