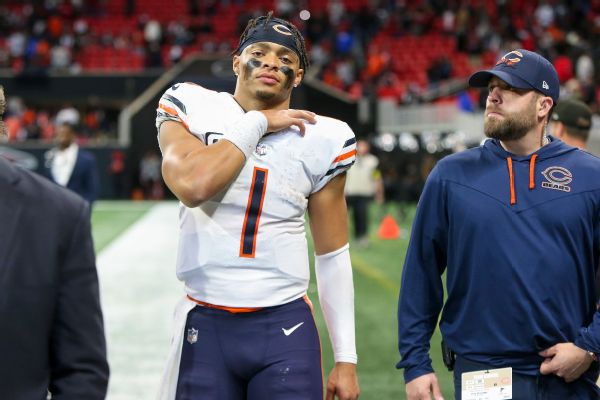 ATLANTA — Bears quarterback Justin Fields injured his left shoulder in the final moments of Chicago’s 27-24 loss to the Atlanta Falcons on Sunday and required further medical examination following the game.

Fields injured his non-throwing shoulder on the first play of the Bears’ last drive when he rushed toward Chicago’s sideline for a 1-yard gain on a designed run. The quarterback landed hard on his left shoulder out of bounds after he was tackled and was slow to get up. Fields took another hit to the affected area moments later on another run play when Falcons defensive tackle Grady Jarrett hit the quarterback with his helmet as Fields was sliding.

The Bears lost their chance at orchestrating a game-winning drive on their third and final play when Fields threw a pass that was tipped off the hands of running back David Montgomery and into the grasp of Falcons safety Jaylinn Hawkins.

Following the loss, Fields was carted back to the Bears locker room, where he received an X-ray and IV treatment. During his postgame news conference, Fields was not wearing a sling and said he did not know the extent of his injury.

“We will have an update on Wednesday,” coach Matt Eberflus said. “We don’t know what exactly it is, that’s why we are going to take a look at it.”

Fields previously said that he was dealing with a left shoulder injury last month. The quarterback clarified that Sunday’s injury was different than the previous one he disclosed on Oct. 20.

Fields was also seen receiving treatment on his hamstrings in the second half after fighting through cramps during the fourth quarter.

“I was hurting but it was the last drive of the game,” Fields said. “I was just trying to be there for my teammates and fight through the pain.”

Fields said he is not sure if this injury will force him to miss games or whether he’ll be able to play through it. While Fields throws with his right arm, the quarterback did feel that the injury to his left shoulder affects his throwing motion.

“The pain right now is pretty bad,” Fields said. “I’ll just take it day by day and see how it feels later in the week.”

After running 14 times in the first half, the most first-half rushes by any quarterback since at least 2000, Fields’ mobility waned as the game wore on. He ran four times for 12 yards, including twice on Chicago’s final drive. He had no scrambles in the second after having five for 33 yards in the first half.