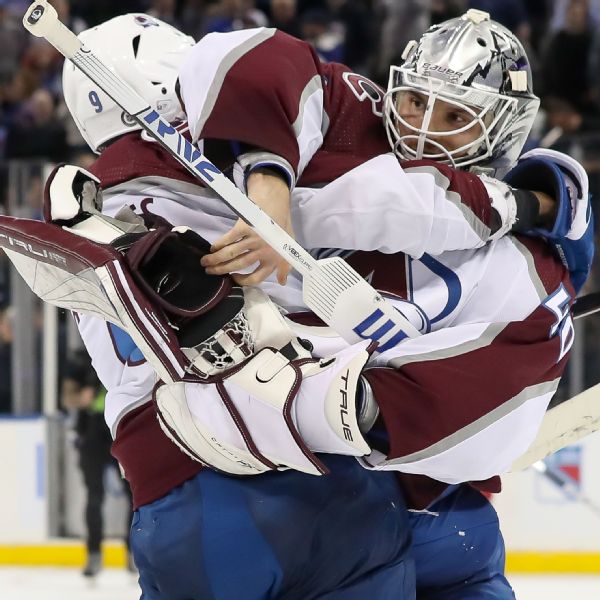 NEW YORK — Alexandar Georgiev skated out of his crease, pumped his fist and celebrated on the ice at Madison Square Garden on Tuesday night. Only this time, the fans weren’t cheering his victory.

Georgiev made 44 saves and stopped three of four shootout attempts to lead the Colorado Avalanche to a 3-2 victory over the New York Rangers. Georgiev spent the first five years of his NHL career with the Rangers before being traded to the Stanley Cup-champion Avalanche in July.

“Pretty special. It doesn’t get much better than a tight shootout win,” said Georgiev, who improved to 4-0-1 on the season. “The building is awesome. Brought a lot of good memories back. But for me, it was just playing the game and letting it come to [me].”

The game featured a sterling duel between Georgiev and the goalie he backed up in New York last season: Vezina Trophy winner Igor Shesterkin, who also made 42 saves. Shesterkin gave up shootout goals to Mikko Rantanen and Evan Rodrigues. Georgiev was beaten by Artemi Panarin but stopped winger Alexis Lafreniere on the Rangers’ final shootout attempt.

“It was a great game for both goalies, I think. You just try to be focused on your job. You can’t do much about what’s happening in the other end. So I wasn’t tracking how many shots or scoring chances were happening,” Georgiev said.

Colorado coach Jared Bednar said both goalies were exceptional, but he was pleased that his was just a little bit better.

“I’m really happy for him. Every game’s a big game, but when you’re coming in against your former team and playing against your old teammates, there’s a little added incentive,” Bednar said of Georgiev. “I’m happy to see our guy come away with two points and the win.”

Avalanche defenseman Cale Makar said the team knew how much the game meant to Georgiev.

“Obviously, we wanted to be able to get this milestone for him. None of us really marked it on our calendar, but we all love Georgie. We’re really happy we got the win, and the win was because of him,” Makar said.

The Avalanche got a power-play goal from Valeri Nichushkin and a short-handed score from Logan O’Connor, coming after a rare puck-handling misplay from Shesterkin. The Rangers’ goals were courtesy of Barclay Goodrow and Adam Fox.

Georgiev said he didn’t have a chance to catch up with any of his former teammates before the game and hoped to do so later on.

“A lot of great memories. A lot of great players and the staff, the team. I try to think about positives. And there were a lot of those [here],” he said.