Argentina now have a third star embroidered on their famous white-and-blue-striped shirts after Lionel Messi and his teammates emerged victorious over France in one of the most enthralling, topsy-turvy World Cup finals of all time.

The Albiceleste eventually won the game on penalties, but only after surrendering a two-goal lead and seeing France drag themselves back level twice on the night, including a 118th-minute penalty from Kylian Mbappe to usher in the shootout after it finished 3-3.

The celebrations were as wild as you might expect, and yet there was still room for some utterly bizarre scenes amid the usual ticker-tape-speckled mayhem. Here are seven things you might have missed from the aftermath of one of the greatest games ever played. 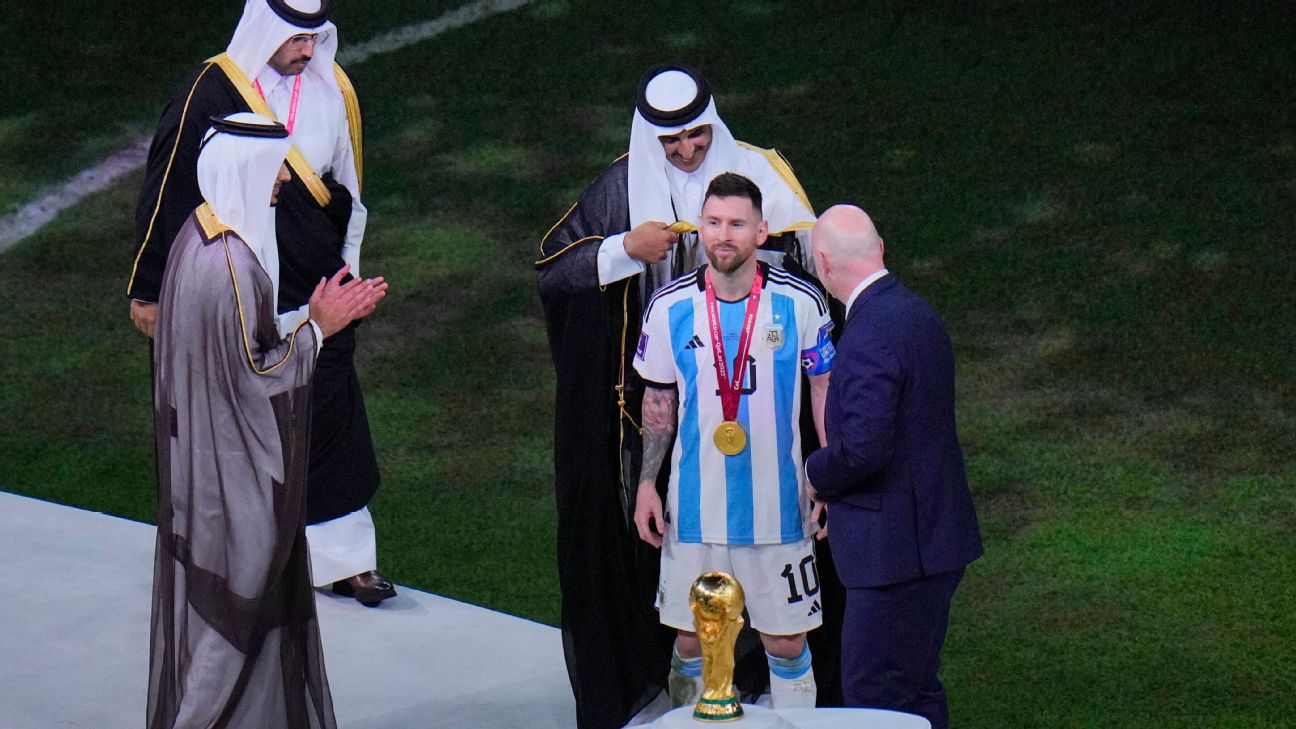 A wave of consternation swept social media during the presentation of the World Cup itself as Messi was made to don a Qatari robe before hoisting the trophy aloft.

Presented by the Emir of Qatar, the robe was actually a “bisht,” which is a ceremonial cloak given in celebration of great victory. While arguably fitting, many fans complained that the gesture took the shine off a career-defining image for Messi and amounted to “sportswashing” given the country’s human rights record.

Eagle-eyed fans also spotted that the Argentina shirt Messi wore had already been adorned with three stars above the AFA badge.

Argentina goalkeeper Emiliano Martinez, who stood tall to deny France striker Randal Kolo Muani what would have surely been a winning goal at the buzzer, did his utmost to disrupt France’s composure and concentration during the penalty shootout with some questionable antics.

But it worked and the Aston Villa stopper was duly bestowed with the “Golden Glove” award for being the best goalkeeper at the 2022 World Cup, which he celebrated in equally questionable fashion, using the award in a vulgar gesture.

Quizzed on why he did it, Martinez told La Red: “I did it because the French booed me. Pride does not work with me.”

Argentina’s minute of silence for Mbappe

Led once again by their rabble-rousing ‘keeper Martinez, Argentina later observed a “minute’s silence” for Mbappe in the dressing room after the France striker became only the second player ever to score a hat trick in a World Cup final — alongside Sir Geoff Hurst in 1966) only to still somehow end up on the losing side.

These Argentina celebrations got out of hand 😂😂😂

And things seemed to get a bit out of hand, with accusations that Argentina had been disrespectful to their opposition later.

Salt Bae inserts himself into the celebrations

There was further — arguably justified — grumbling on social media when celebrity chef Salt Bae (also known by his real name of Nusret Gokce) somehow managed to wind up getting his hands on the most prestigious trophy in football during the postmatch revelry.

Several Argentina stars past and present, including both Messi and Diego Maradona, have been seen enjoying steaks at restaurants owned by Gokce over the years, but for some, his presence on the pitch as a VIP after the final was a little hard to swallow.

There were similarly awkward scenes in the France camp as President Emmanuel Macron attempted to console a clearly heartbroken Kylian Mbappe, only to be blankly ignored by the crestfallen striker.

”We are first of all very sad, very disappointed,” Macron later told reporters in Qatar, presumably about the defeat and not Mbappe’s reaction.

Elsewhere, rapper Drake also ended up on the losing side after seeing his enormous World Cup final bet fail to pay off.

Despite backing Argentina to win, the Canadian music star reportedly lost $1 million due to the fact that his bet didn’t account for a win on penalties.

As you might expect, the mood was a little more raucous in Buenos Aires as Argentina fans the world over partied long into the early hours.

There were also similarly joyful scenes in Naples as disciples of the great Maradona celebrated his homeland’s amazing success.