After may tuneup, Canelo Alvarez wants rematch with Dmitry Bivol 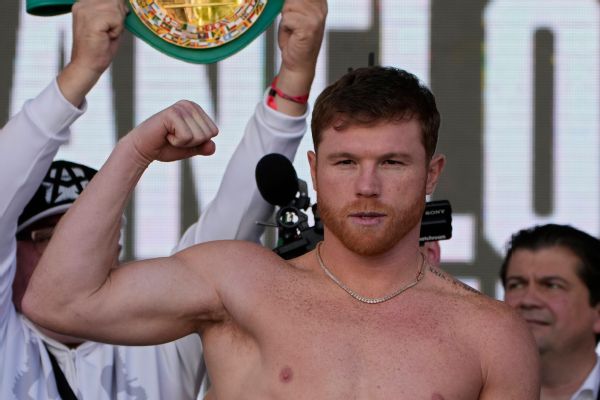 Undisputed super middleweight champion Canelo Alvarez said Wednesday that he will be ready to return to the ring in May and hopes to get a rematch against light heavyweight titlist Dmitry Bivol in September.

Alvarez (58-2-2, 39) made the announcement during an event in Mexico City to present his new drink brand VMC. Alvarez finished 2022 with a 1-1 record, including a victory in the trilogy fight against Gennadiy Golovkin in September and a loss to Bivol in May.

“My plan right now is to return in May. I’m going to start training in January and see how I feel after that,” Alvarez said, referring to his recovery from left wrist surgery last month that put his May return in jeopardy.

About a possible opponent for May, he said Bivol is not an option, even though he does want the rematch later in the year.

“The idea is to return in May with a tuneup fight to see how I feel and then get the rematch against Bivol in September,” Alvarez said. “That’s the only thing I want for my career right now.”

Alvarez, 32, ESPN’s No. 5 pound-for-pound fighter, does have his eyes on the super middleweight bout between Caleb Plant and David Benavidez, a mandatory fight recently ordered by the WBC. ESPN ranks Canelo No. 1, Benavidez No. 2 and Plant No. 3 in that division.

“Let’s see how that fight goes,” Alvarez said. “It’s a very competitive fight and to me, I see Benavidez winning, but my focus is on the Bivol rematch.”

After may tuneup, Canelo Alvarez wants rematch with Dmitry Bivol